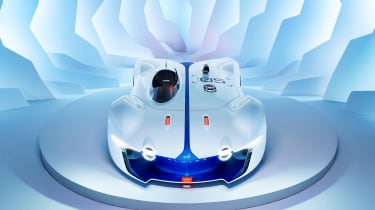 The Alpine name hasn’t been seen on a road car since the A610 of the 1990s, but still holds huge cachet with petrolheads thanks to its race and rallying success and the beautiful cars the Renault-owned firm produced through the years.

It’s set to return in 2016 on an all-new road car, but in the meantime the closest most of us will get to driving a new Alpine is in Gran Turismo 6 on the Playstation 3, with the latest Vision Gran Turismo concept. 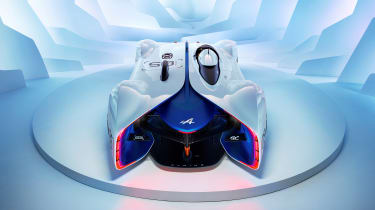 For Alpine design director Antony Villain, the Vision GT’s design ‘needed to contribute to the lightweight feel and convey an impression to the driver of being at one with the machine’.

The car’s distinctive front-end styling is inspired by that of the Alpine A110 Berlinetta, whose front end is a riot of headlights and driving lamps, while the rear takes inspiration from Alpine’s A210 and A220 Le Mans racers. Villain suggests that some of the car’s detailing will be seen on the 2016 road car too, though doesn’t elaborate further. 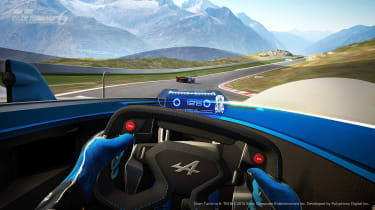 Other features are pure fantasy, such as the huge airbrakes that extend from the car’s rear flanks when the driver brakes. The wheels too are a striking design, and colour schemes evoke Alpines both old and new – the blue and orange racing scheme echoing that of Alpine’s modern A450 endurance racer.

Gran Turismo creator Kazunori Yamauchi says he is ‘proud’ to have Alpine on board with the Vision Gran Turismo Project, adding that he has ‘always had a great deal of affection’ for the company.

The Alpine Vision Gran Turismo will be available to download free of charge in Gran Turismo from March. A physical model of the car will be exhibited at the 2015 Rétromobile Show in Versailles from February 4-8.