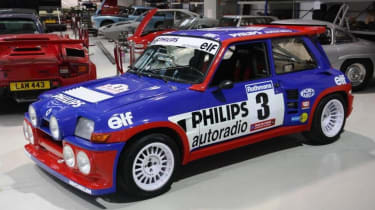 The recent unveiling of the Renault Sport R.S.16 gave us the chance to reminisce on some of the firm’s more extreme road-going vehicles.

Renault Sport has given us some of the most memorable performance cars of the last two decades, but it’s those range-toppers – such as the Sport Spider and Clio V6 – that have shown what the company is really capable of.

But it’s the car you see here that kicked off Renault’s reputation as a company willing to go the extra mile. Actually, to be accurate, it was the car that predated this Renault 5 Turbo 2 (called, not unsurprisingly, the Renault 5 Turbo), placing an engine where no power unit had gone before in a diminutive shopping car – in the middle.

A little back-story: As Group 4 rallying took off in the 1970s, Renault was keen to compete. No front-wheel drive car would do against the might of the Lancia Stratos or Fiat 131 Abarth however, so while Marcello Gandini was tasked with creating suitably distended bodywork, Renault’s engineers set about creating a bespoke, mid-engined layout.

Its engine was familiar – a 1397cc ‘Cleon’ unit used widely throughout Renault’s range – but boosted by a turbocharger, power output rose to 158bhp, making it the most powerful French car of its day. 400 were made for Group 4 homologation. 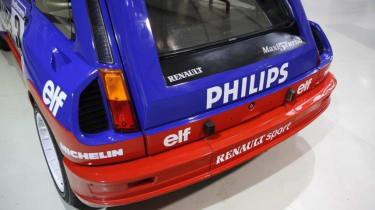 The Turbo 2 – represented by the car you see here, for sale at Cheshire Classic Cars in Chester – was slightly more conventional in its details to reduce cost, but eventually more extreme, as Renault brought rallying examples up to Group B specification.

The Group B cars were rampantly fast – in evo 222, Richard Meaden drove an example putting 300bhp to its rear tyres with just 910kg to propel along – and proved successful in the hands of Jean Ragnotti in particular, who took victory on the Tour De Course in 1985, the heart of the all-wheel drive Group B era.

This Philips-liveried car is a replica of Ragnotti’s car, a 1982 example restored and converted to its current specification between 2010 and 2013.

It boasts a collection of official parts, from the full ‘Maxi’ body kit to a Maxi cam, Renault Sport gearbox and pedal box, and a set of Compomotive wheels. The engine, rebuilt ‘less than 500 miles ago’, is believed to be putting out around 275bhp.

You’ll need deep pockets to own it at £89,995, but since mint-condition road variants go for similar money and original rally cars command six figures, it could be the best option for someone seeking rally car performance for a relatively modest price.

Hopefully, it’ll be a while before Clio V6 prices go the same way as its mid-engined predecessor – but you can guarantee that Renault’s craziest Clio wouldn’t exist were it not for the car you see here.

> Find Renault 5 Turbos for sale through Classic and Performance Car