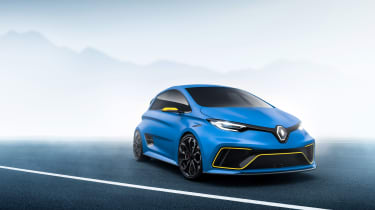 The Geneva motor show has served as the launchpad for a more powerful version of an all-electric Zoe. Bearing the Zoe E-sport moniker, this hunkered down Renault depicts the ultimate electric hot hatch interpretation. The project has revolved around furthering the French manufacturers electric drivetrain development and also marks the success in the Formula E championship. The E-sport is much more in tune with Renaultsport produce, which evo has a soft spot for.

The body has been widened to encase a wider track, necessary to cope with the extra performance. The E-sport takes on a more square and squat stance that looks suitably pugnacious in matte blue and offsetting yellow accents, mimicking the livery found on the Formula E racer. 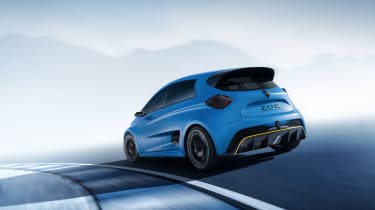 The Formula E links don’t stop at the appearance. 456bhp and 472lb ft derived from a dual motor setup -using two Formula E power units- directs the power to all four contact patches. This unhinged Zoe eclipses the output figures of all the production of performance hatches on the market which are only just breaching the 400bhp milestone.

Four driving modes allow drivers to adjust the balance and bias towards power conservation or outright performance via a dash-mounted panel. These selectable modes replicate the system found in the Formula E car and also reflect changes in torque split to the two axles. The panel also allows fine-tuning of the transmission and brake bias.

For the E-sport to make such a significant amount of power it has to carry around a 450kg battery, 160kg more than the standard car. However, to compensate for the extra weight the hot Zoe’s chassis is made from a tubular steel structure and the pumped-up body is made from carbonfibre and Kevlar. The result is that the E-sport weighs 1400kg, 68kg less than the road-going Zoe.

The effect of such significant power, improved traction and a lightweight body and chassis, is that the Zoe E-sport can accelerate from 0-62mph in 3.2sec. Unsurprisingly that’s quite a bit quicker than an ordinary Zoe - in fact, it's whopping 10.3sec faster. 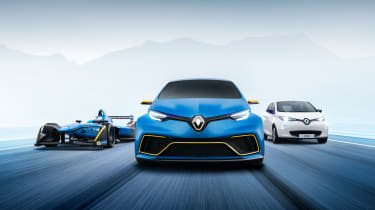 Top speed is limited to 130mph, just fast enough for the E-sport to make the most of its array of aerodynamic aids. An airdam and splitter help keep the front on the ground while a large carbonfibre spoiler assists at the rear. Most significantly though, the Zoe E-sport has a completely flat floor and rear diffuser.

With the standard Zoe’s chassis replaced with a tubular space frame structure, it's no surprise to hear that its MacPherson strut front and torsion beam rear axle have both been replaced by double-wishbone suspension all round. To add to the suspension’s greater control, the Zoe E-sport is outfitted with a set four-way adjustable Öhlins dampers similar to those found on the Renault Sport Megane 275 Trophy-R. Huge centre-lock 20-inch wheels shod in 245/35 R20 tyres cover some suitably large brakes.

A pair of Recaro bucket seats and harnesses set the tone for the interior, and give it a competition car vibe. A digital dash, a rectangular steering wheel, lots of Alcantara and a few aluminium switches further cement the E-sport’s race car look.

It’s not all race car-style function, though; Renault has eschewed door handles for the E-sport. Instead you open the door by tapping a touch sensitive area of the door. The front and rear Renault badges are also backlit, just like the Trezor concept that made its debut at the 2016 Paris motor show.

The Zoe E-sport is the latest in a line of driveable concepts that Renault has launched over recent years. It’s likely to remain just a concept though, just as the outrageous V6-powered Twingo TwinRun and KERS-equipped Twizy F1 unsurprisingly never made production. And sadly, neither did the more conservative Clio R.S.16.