Renault’s limited edition Clio R.S. 18 will be strictly limited to 15 units at just over £24k 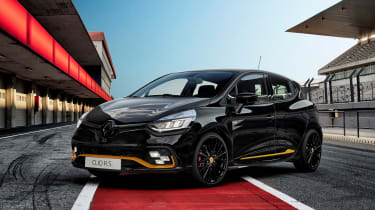 Details about the limited edition Renault Clio R.S. 18 have been released by Renault, confirming that just 15 cars will arrive in the UK, all carrying a hefty £24,295 price tag. Based on the Clio R.S. 220 Trophy, the R.S. 18 features a variety of aesthetic changes inside and out, as well as standard fitment of a fruity Akrapovic exhaust system.

Available exclusively in black with a suite of Liquid Yellow highlights, the R.S. 18 is meant to mimic the look of Renault’s 2018 F1 contender. Bespoke elements include the yellow wheel centres, a yellow bridge element in the front bumper and black Renault diamond badges. Also prevalent are subtle R.S. decals on the front doors and roof. These changes build on the Clio’s recent updates, which introduced new LED lighting units and upgraded interior tech.

> Click here for our full review of the Renault Clio 220 R.S Trophy EDC

The changes inside are limited to a black Alcantara-wrapped steering wheel and stainless steel sill plates and some new carbon-effect trim. 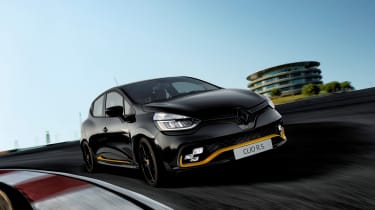 Mechanically, the R.S. 18 is identical to Clio R.S. 220 Trophy, complete with the lowered, stiffened Trophy chassis set up. The R.S. 18 also uses the same 1.6-litre turbocharged four-cylinder engine with 217bhp, unfortunately laden with the hesitant and interaction robbing EDC dual-clutch gearbox. Despite the new Akrapovic exhaust, the R.S. 18, but still doesn’t completely fix what is at its core a flawed hot hatch.