Another Renaultsport Clio 200 special edition - meet the Raider, with 18in wheels, matt paint and a Renault 5 Turbo inspired name 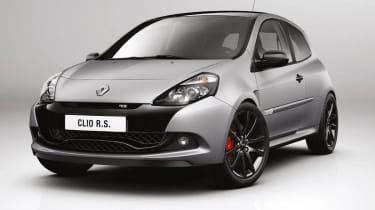 The Renault Raider is making a comeback. It’s a limited edition tag last used on the 5 GT Turbo of the early 1990s, and it’s now being applied to 50 Renaultsport Clio 200s. We thought the similarly limited 200 Silverstone GP (review here) was the run-out special for the naturally aspirated fast Clio; it appears there may be more special editions yet. The Raider should drive a little different to normal, though, with new 18in alloy wheels (an inch bigger than any other Clio 200) wrapped in Bridgestone RE 050A tyres like those used on the Renaultsport Megane 265 Trophy. The Cup chassis is standard-fit, bringing its lower ride height, stiffer springs and dampers and quicker steering rack compared to non-Cup RS Clios. Cosmetic changes, on top of those new ‘Interlagos’ wheels, include the choice of matt paints (Stealth Grey or Diavolo Red) and a plethora of gloss black sections, namely the roof, rear spoiler, front blade and rear diffuser. There’s also the obligatory Raider badging. Inside there’s leather-clad Recaro seats up front, a newly white rev counter and a numbered plaque to signify your Raider’s place in the production run. As a no-cost option you also get the choice of either Renaultsport Monitor – a digital 0-62mph, ¼ mile and lap timer plus G meter – or an integrated TomTom navigation system. We’d pick the telemetry system and sucker a sat-nav to the windscreen… Renaultsport Clio 200 Raider order books open at the end of October, when prices will be confirmed. But with the less well-equipeed Silverstone GP costing £19,995, you could be looking at a £20K-plus Clio, and the most expensive since Clio V6 production stopped in 2005. Renaultsport Clio 200 Cup v Clio non-Cup comparison We drive the Renaultsport Clio 200 Silverstone GP Edition