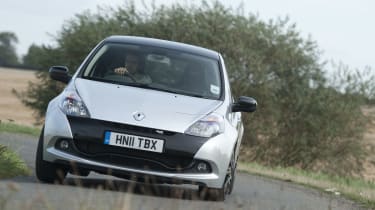 Pretty much the last hurrah for the Renaultsport Clio 200. The Silverstone GP is a limited edition of 50, and is set to be the most expensive Clio since the death of the mighty V6, carrying a £19,995 pricetag. That’s a major hike over the price of the most basic Renaultsport Clio Cup - £16,390 to you – but the range-topper comes with pretty much kitchen-sink spec including unique-to-it silver paintwork, climate control, auto lights and mirrors and some natty 17-inch black alloys. Plus that all important ‘limited edition’ plaque of course – only 50 will be produced.

With pretty much every other manufacturer of small performance cars moving to turbocharged petrol engines, it’s not hard to see the Clio’s naturally aspirated motor as being the end of an era – it’s certainly one of the last hot hatches that enjoys being ragged out to over 7000rpm. We already know that the next-gen Renaultsport Clio will be shifting to a 1.6-litre turbocharged engine, so get it while you can.

The chassis settings are similarly unchanged from the existing Clio 200, with the Silverstone GP getting the firmer ‘Cup’ suspension settings.

Still pretty great, even after all these years. The Silverstone GP might be little more than a paintscheme and a plaque, but it’s still worth celebrating the way the Renaultsport Clio does its thing. There is communicative steering, brilliant brakes and a real tactile pleasure to be derived from rowing the Clio up and down the closely stacked ratios of the six-speed manual gearbox.

As with the basic Renaultsport Clio Cup the chassis is pretty much spot-on. There’s lots of grip, but not too much – the Clio has a beautiful handling balance that enables you to pay the front and the rear ends off against each other, the decision on which end loses grip first left pretty much up to you. Very few cars enjoy being chucked around as much as the Clio seems to – or forgive so easily when you transgress their limits. We really will miss it when it’s gone.

The Silverstone GP’s biggest competitor is likely to be the standard Clio 200. And unless you really need a few extra toys – or place enormous importance on the exclusivity brought by the limited edition plaque – we reckon that the basic car probably still offers better value.

There’s also a limited-to-50 Silverstone GP edition of the Renaultsport Twingo offering a similar deal – the hardcore Cup chassis settings along with a unique paintscheme and a few more toys. At £14,995 it’s £2785 more expensive than the Twingo Cup.