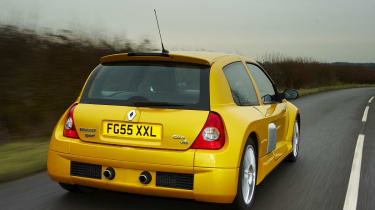 Clonk! This was the awful noise my Clio made as the brake pad finally freed itself from the front-left disc. Three weeks of inactivity and road salt had conspired to glue the two together, and the gravel the car was parked on compounded the issue. When I first tried to drive off, the locked wheel simply shovelled a load of stones into the wheelarch. The car sank and became immobile.

The solution? Jack it up, place paving slabs over the gravel, select reverse and drop the clutch. One horrible noise later, the Clio was free. Clonk…

In other news, I’m soon learning that people who own Clio V6s are divided between two camps. Those who have spun and hit something and those who have spun and not. You see, if you own a Clio V6, someday, somehow, you will spin it. The god of swb, rwd, mid-engine, TC-less machines with pathetic steering lock has deigned it.

Those who have spun and avoided hitting anything carry themselves with a swagger not unlike test pilots and rocket-sled 'volunteers' of the 1950s - a swagger that says 'I've been to the very edge, tweaked its nose and blown a raspberry in its face... and returned to tell the tale'. Those who spun and hit something clutch photos of their beloved deceased close to their chest. Or post them on the internet.

As I write this, I have so far spun my V6 five times and not hit a single thing. There's little doubt that I'm pushing my luck. The first time involved snow, ice, gravel and a misguided belief that I have the reflexes of Jean Ragnotti. Brrr, zizz, around she went.

The 2nd to 5th spins occurred on a Fast Fleet day out at Bedford. With Roger Green in the passenger seat, I foolishly said while applying too much right foot: 'Let's see how quickly it can spin.' The car rotated even before the word 'spin' had formed on my lips. Sure, it was wet, but the sheer speed of the rotation shocked me. Knife-edge is one way to describe it. Poopy-pants is another.

What did I learn from taking the V6 on track? To drive with more care and more forethought on the road. And the interesting thing is, this is making me a safer driver on the road.

The conclusion? I have solved the issue of poor driving standards in the UK: make everyone drive a Clio V6 for a month.