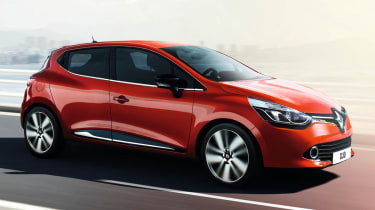 Renault has revelaed its fourth-generation Clio. It will gets its full unveil at the 2012 Paris motor show in September, when Renaultsport’s hot hatch iteration will also appear in production form. The new Clio comes in five-door form only, with the rear door handles concealed to give the look of a three-door. The styling is influenced by Renault’s DeZir concept car, with a bold front grille and heavily sculptured lines on the doors. It rides lower and boasts wider track widths than the mk3 Clio it replaces. The interior looks much smarter and plusher than before and will come with a host of colour and personalisation options. R-Link, an internet-ready touchscreen tablet, will be on the options list and includes an app which allows the choice of six different ‘engine sound profiles’. Other options include a reversing camera, keyless entry and a bass reflex system, which boosts the stereo’s sound.  Engine choices include the TCe 90, a new 0.9-litre three-cylinder turbo petrol unit. It combines 89bhp and 100lb ft of torque maximums with 65mpg and 99/g/km of CO2 emissions, the latter currently making it tax-free in the UK.  Other choices are a dCi 90 (1.5-litre four-cylinder turbodiesel, 89bhp, 162lb ft, 88mpg, 83g/km) and TCe 120 (1.2-litre four-cylinder turbo petrol, 118bhp, 140lb ft, no economy figures yet available). The latter two will have the option of Renault’s six-speed EDC twin-clutch auto gearbox, while all units get stop/start technology. The Renaultsport version will use a turbocharged 1.6-litre petrol engine with around 200bhp, mated exclusively to a twin-clutch transmission. As a preview, Renault boss Carlos Tavares drove it up Goodwood hill at the 2012 Festival of Speed; you can see pictures of the camouflaged car on the right. The existing (and naturally aspirated) Renaultsport Clio 200 has been our favourite hot hatch since launch, giving its replacement a lot to live up to.  The all-new Renault Clio goes on sale this October (starting at around £11,000) with the Renaultsport version following in Spring 2013 (from around £18,000), by which time it will have the Peugeot 208 GTI and new Ford Fiesta ST to beat.