Hot Renault Clio gets a new face, a sharper chassis and a touch more power 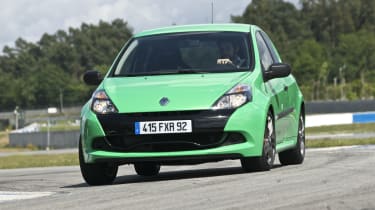 Piling into the first corner, bouncing over the high-kerbed apex and then squirming on the brakes for a left-hander, it’s hard to tell if the new Clio 200 has the claimed 20 per cent more low-end torque than the old 197. We’re at Braga, an airfield-cum-playground in northern Portugal, and to be honest eight laps of a race circuit (two behind a pace car) is not really ideal for assessing Renaultsport’s latest. Fun, yes. Minutely informative, not really.

First thoughts on seeing the car are that a Muppet frog was put in charge of the colour charts. Alien Green is a slightly odd colour but then the new face of the 200 is slightly odd too, with a large black bar across it, beneath which there is an F1-inspired ‘aerodynamic blade’. All I’ll say is that the current Renault F1 car ain’t so hot in the looks department. Round the back is the familiar diffuser of the 197, but rather disappointingly the exhausts that used to sit beautifully flush inside it have now been made to discharge through rather less cool chromed finishers.

Inside, the excellent, waspish Recaros remain a very tempting £850 option, but the new Ferrari-esque yellow rev-counter comes as standard. The spec of the rest of the interior depends on which version of the 200 you go for. The ‘200 Cup’ is designed as a lightweight (1204kg) tool for the buyer who can do without some of the electrical niceties. It comes with the sportier Cup chassis as standard but does without climate control, electrically adjustable door mirrors, front fog lamps and, perversely, a reach-adjustable steering wheel, amongst other things. The ‘200’ costs £1000 more, at £16,570, and has more luxuries but relegates the Cup chassis to the options list (£400).

Both the standard and Cup chassis now get hydraulic double-effect dampers, which include an additional level of valving, and on the non-Cup chassis they’re actually set 15 per cent softer than on the 197 to improve comfort. By contrast, the new Cup chassis gets damper settings that are 15 per cent stiffer than the 197 Cup’s. The Cup chassis also has stiffer springs than the standard 200 – 27 per cent firmer at the front and 30 per cent at the rear – and a 7.5 per cent quicker steering rack. Finally, all 200s get an ‘independent steering axis’ front suspension  (RevoKnuckle in new Ford Focus RS speak, but in fact a system that’s been working brilliantly on Renaultsport Méganes for a while) that reduces torque steer and works in conjunction with an uprated torsion-beam rear axle for greater precision on turn-in.

Part of the reason it’s hard to detect the aforementioned swelling of the torque curve’s girth anywhere other than the pitlane is because maximum power and torque remain largely unchanged. However, the shortening of first, second and third gears do give a slight improvement on the rather leggy feel of the 197. Furthermore, the new Cup chassis feels subtly sharper than that of the 197, which I drove around this same track when that car was launched. There’s a precision to the steering and a lightness to the way the Clio changes direction and gets its rear end involved that makes it great fun, and the Brembo brakes do a fantastic job.

Frustrating as the launch was, the fact that the 200 Cup feels at home skipping over stripy kerbing and attacking corners on the limit bodes well for when we get it on the road in the UK. Hopefully here the changes will be more obvious and it’ll prove to be a grower in the looks department…