A good car but not a great one 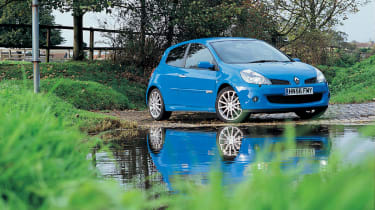 Twenty-seven thousand miles. That’s a big distance for a Clio 197 to cover in just over a year, especially considering the car’s reputation for being a bit frenetic to live with. So how did it stack up over all those miles?

Well, me and the Clio didn’t get off to the greatest of starts. I’d been running around in my Clio Trophy while I waited for the 197 to arrive, and that turned out to be a big mistake. The Trophy is a proper old-school hot hatch: big-hearted engine, small body, honed chassis. It’s the definitive hot hatch in my book; a very hard act to follow. So, perhaps predictably, the first time I drove the 197 it was a bit of a letdown. The hooligan hot hatch feel I’d got used to wasn’t there. Rather than being a ‘Trophy Plus’, the 197 turned out to be a completely different car, much more grown up, posh even, and propelled by an engine that felt like a distant cousin of the Trophy’s muscular unit, even though it was fundamentally the same.

The sheer size and weight of the new Clio didn’t help either (nor did it do the petrol consumption any favours) and after a while I came to think that the 197 actually belonged in a completely different sector of the market. It’s a thought that’s reinforced when you consider the price of the thing. Our car arrived with relatively few toys added to the standard spec – just tinted rear windows, a CD player, electric heated/folding door mirrors and trick xenon lights (the ‘dipped’ lights remain on when you bring in the main beam and there are additional cornering lights that come to life when you turn the wheel more than 90 degrees) – but still its price came in at £17,045. That’s a long way north of the old Clio 182, although admittedly air-con, cruise control, keyless entry and steering column controls for the stereo are all standard items on the 197. The price could have been nearly 18 grand, though, if we’d opted for the tempting Recaro seats (£850), but as it turned out the standard items were terrific – great over long distances and with grippy side bolsters.

So the 197 is expensive, but then ours always felt much better built than any previous generation Clio. Renault has made great strides in terms of quality control and it really showed on our car: even after all those miles there was no slop in the gearchange, no wear showing on the seats or steering wheel and, most surprising of all, not a squeak or rattle to be heard. Was this really a Renault?

The miles piled up quickly (my commute to the office is a 130-mile round trip) and I soon got to appreciate the 197’s star characteristic: a terrific chassis that can really eke out grip, even in the most desperate of conditions. I hardly ever felt like turning the ESP off as I rarely felt it intervening. In fact, it got to the point where I became convinced that it wasn’t working, but all I needed to do was deactivate it via the switch on the dash and the car would slither into dramatic understeer the moment I was a bit rough on the throttle. Whoever set it up got it absolutely bang on.

Shame the same can’t be said for whoever signed off the gearing. Frantic is the best description for it. I got used to it when travelling on my own (especially with the excellent CD player pumping), but whenever I carried passengers they would soon start moaning about the din of the buzzy engine, and whenever I returned to the car having not driven it for a while I would find myself looking for a non-existent seventh gear for the first few miles. All new 197s will soon have revised gearing to help reduce this problem, which is good to hear, but an easy tweak that I found really helped was to remove the rear parcel shelf. This allowed the nice rasp from the exhaust to come into the cabin more often, which was much nicer to listen to than the mechanical thrash coming from the engine bay. Sadly there was no easy cure for the lumpy running of the engine, which was awful from cold, leaving me looking like a learner for the first mile or so. ‘Ah, they all do that, sir,’ was Renault’s response when I asked about getting it fixed.

Another fault was the way the brakes were badly effected by wet weather, with the discs needing a moment to dry out before the pads got to work – not a nice feeling when all you want to do is stop.

Our Clio had a big adventure back in issue 104 when we took it down to the South of France to do battle with the Mini Cooper S, SEAT Ibiza Cupra and the newly launched Corsa VXR. While everyone raved about the Clio’s chassis, my nagging doubts about the exact breeding of the supposed 197 horses residing under its bonnet were brought into sharp focus. Despite being the most powerful car there it was decidedly the slowest. The horrid electric powered steering rightly came in for criticism too – the way it feels granny-light at low speeds crucifies your initial impression of this being a drivers’ car.

It’s such a shame the Clio 197 suffers from these fundamental flaws, because the more miles I covered in it, the more I appreciated its strengths. I used it for carrying the family around far more than I had expected I would, I liked its low-key exterior demeanour and I loved the ‘keyless go’ system (something that should be standard on all cars now in my view). But are these the kind of qualities the buyer of a hot Clio looks for? I don’t think so. What Renault really needs to do is get back to basics: reduce the weight, dump the electric power steering, find some torque for the engine.

The Clio 197 is a good car, then, but not a great one. I’ll miss it for its usability, but I wanted to have more fun along the way. To be honest I was expecting better from Renaultsport.