The French team’s first F1 car from 1977 will take to the Monaco circuit and will be joined by Alain Prost, too 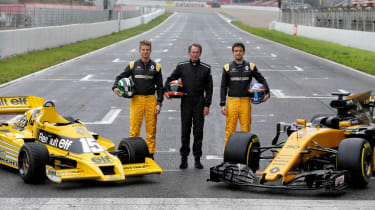 As well as launching its new Mégane RS at this year’s Monaco Grand Prix, Renault will also be using the event to celebrate 40 years of its involvement in Formula 1.

Jean-Pierre Jabouille, the man who raced Renault’s first Formula 1 car, will take to the street circuit on Friday 26th May in that very car, the RS01. Jabouille will be joined on track by four-time World Champion Alain Prost, who will be driving the first Renault F1 car to be constructed from carbonfibre, the R.E.40.

The two old Renault Formula 1 cars will warm up the crowds before Nico Hülkenberg, current Renault F1 driver, drives the all-new Renault Sport Mégane around the iconic GP circuit. This will be the first time we get see the new hot hatch.

Arguably the British GP weekend would be a more fitting location, because it was at the Silverstone F1 race in 1977 that Jabouille raced the RS01. Although we imagine Renault would argue that Silverstone has changed so dramatically since 1977 that Monaco is just as appropriate a place to celebrate its 40th anniversary. 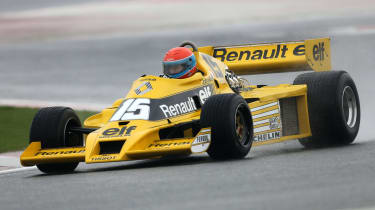 The RS01 wasn’t just Renault’s debut Grand Prix car, but it was also the first ever turbocharged F1 car. Its initial outing wasn’t glorious, and sadly it retired before the end of the race. But rather than being a flop, the RS01 was the start of the forced induction revolution in Formula 1 as it proved successful not only winning points only a year after its introduction but in delivering an outright win in Dijon in 79. Impressive, considering it was such a dramatic mechanical departure from a new team.

Renault continued to recruited French drivers and Jabouille was joined by René Arnoux in 1979, then Alain Prost joined the team in 1981. Prost closely missed out on the 1983 drivers’ title as Nelson Piquet finished the season just two points ahead.

By the early eighties F1 was being dominated by turbocharged engines. As an early adopter of the technology, and now experienced in forced induction engines, it started supplying engines to other teams, including Lotus then subsequently Ligier and Tyrrell. Renault’s success as an engine supplier meant that it pulled out as a competing team to focus on creating powertrains.

The French marque then joined forces with Williams and the partnership proved almost unbeatable. After numerous race wins in 1989, 1990 and 1991, Nigel Mansell then went onto win the World Championship in 1992 in the Williams-Renault and helped secure the constructors’ title, too – a first for Renault. 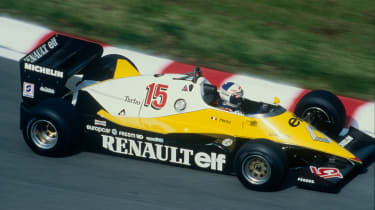 > Find out what one of evo's favourite hot hatches, the Renault Clio Williams, is like to own

Although we’re sure Williams was gutted the partnership dropped a year, not winning in 1995, Renault wouldn’t have been so upset. The French company also supplied an engine to the Benetton team that won the constructors’ gong in 1995 giving Renault six consecutive wins. Michael Schumacher also won the drivers’ title in the same year.

After a brief hiatus from the sport after 1997, Renault rejoined in 2001 as Benetton’s engine supplier. Although, only a year later, the team was renamed Renault F1 Team. With only a handful of seasons under its belt, Renault F1 won the 2005 constructors’ title yet again and powered Fernando Alonso to his first World Championship. 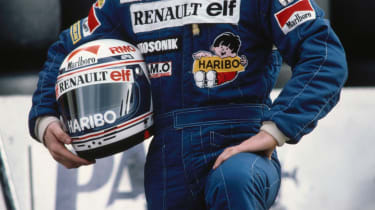 Renault once again returned to just supplying engines to other teams and most notably it created the V8 that powered Sebastian Vettel’s Red Bull, helping him win the 2010, 2011, 2012 and 2013 World Championships.

Regulation changes in 2014 reintroduced turbocharged engines and, as it was the company that introduced forced induction to F1, there was an expectation that Renault would be successful with its new 1.6-litre V6. Sadly, it wasn’t to be the case as the Mercedes engine proved more powerful and more reliable.

During this new turbocharged Formula 1 era Renault has returned as full manufacturer entry. Now called the Renault Sport Formula One Team it has gradually improved its powertrain, but it’s still lagging behind Mercedes.