We took our Megane R.S 225 Trophy to Monte Carlo for the iconic Monaco Gran Prix 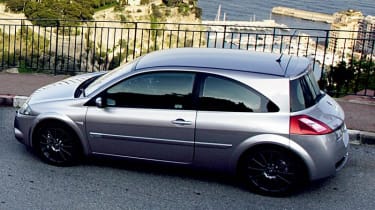 The Monaco Grand Prix; the noise, the cars, the history, the glamour. A mecca for any racing fan. I, like most of you, love it and have watched it on TV every year since I was a nipper.

This year I was fortunate to spend two days in Monte Carlo the week before the race. I was with road test ed Bovingdon testing the new Ferrari Superamerica (issue 081). At the time all the barriers and fencing were being erected for race weekend. Already there was the buzz in the air that comes when F1 arrives in town.

I wish we could have stuck around, because a couple of days later the Mégane Trophy that would soon be joining our long-term fleet arrived in Monaco to play its own part in the circus. It was there as part of Renault's publicity machine, helping forge a link in punters' minds between the race cars and the road cars. Glamour by association, I think it's called.

I was gutted not to be there, especially as I'd miss the chance to meet the man who was to be parading my new long-termer around the monied streets of Monte Carlo that weekend, none other than F1 championship leader Fernando Alonso. I guess the Trophy was a tad slower around the streets than his own Renault long-termer, what with all the 'traffic', but hey, at least he had a radio if he wanted to listen to the football results.

To deaden my pain at not going, the ever-so-nice people at Renault managed to get both Alonso and team-mate Giancarlo Fisichella to sign the sun- visors on my Mégane, with the photos to prove it. Now that's what I call a special edition. Our Trophy is No. 322 of the 500 being built, just 150 of which are coming to the UK, but I'll bet it's the only one that's been signed by this year's Renault F1 drivers. Even on the streets of Monaco, where exclusivity rules, that's going to have to merit a parking space outside the casino.

The Mégane finally made it to the office last week. The delivery driver dropped it off with a 'Some blokes have signed your sun visors, I guess they're famous then?' jibe. It's the first Trophy that I have seen in the metal, and it really is quite strikingly different to the standard Mégane. With its silver-grey paintwork complemented by the cool-looking Anthracite 12-spoke 18in alloys, the Trophy - or Mégane Renaultsport 225 Trophy to give it its proper title - has a real visual edge to it. Inside, the new Sport seats are comfortable and supportive and seem to let you sit lower in the car than in the standard Mégane, which is an improvement.

With its turbocharged 222bhp 2-litre four, six-speed gearbox and the new suspension package, the Trophy clearly means business. With only a week or so at the wheel, I'm not going to make any judgments on the chassis changes, though it's clear the guys at Renaultsport have fine-tuned the set-up since Jethro and I joined Stephen Marvin, chief project engineer, for a development drive six months ago (issue 079).

Having run a Clio Cup for a year, managing to put nearly 37,000 miles on it, and having been lucky enough to have put a few miles on our much-missed Clio V6, I am looking forward to putting the Trophy through its paces. As anyone in the publishing industry will tell you, the hardest- working cars on any long-term fleet are those driven by the photographers. Not only do they have to cart ridiculous amounts of equipment around the country, doing crazy miles every month, they also have to keep up with all the test cars, and on a magazine like ours that's quite a challenge.

Now that summer is apparently here, I'm looking forward to spending plenty of time with the Trophy and its autographs. I might even see if Mr Alonso will repay the favour and let me take his car for a quick drive. Well, it's worth a try isn't it?