Small improvement in dynamic ability, but questionable as to whether it’s worth the additional money 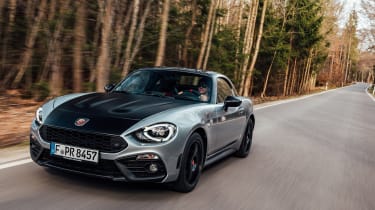 We’re big fans of the fun if flawed Abarth 124, the raucous, turbocharged half-brother of the Mazda MX-5. So the idea of an even more sportingly focused variant appeals, whatever the changes may be. Sadly, if you’re expecting a road-going derivative of the Abarth 124 rally car you’re going to be very disappointed: the GT gets a carbon fibre hardtop, lighter alloy wheels and a BOSE stereo, but is mechanically identical to the regular Abarth 124.

It’s the little 1.4-litre turbo motor that does much to give the 124 a very different character to the Mazda that it’s based on. Our GT had just 400 miles on the clock, and subsequently felt rather tight and strained at higher revs, but we know from previous experience that the punchy low down torque is an enjoyable combination with the 124’s low kerbweight. The six-speed manual ‘box has a delightfully quick and direct shift quality, too. The Abarth gets to 62mph from rest in 6.8 seconds, and tops out at 144mph. 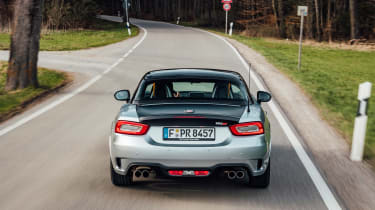 The carbon roof weighs around 16kg and improves the torsional rigidity of the 124, although by how much Abarth won’t disclose. The panel is held on by five screws, and while removing it isn’t the work of an instant, we’re told it’s a one person job. The usual canvas roof lies flat inside the car ready to be used if the hardtop has been removed.

The 17” inch OZ alloys run the same 205/45 R17 Bridgestone RE050A tyres as the standard Abarth, but each wheel is about 4kg lighter than the standard rims - and hence negate the weight penalty of the roof.

It’s all too easy to convince yourself that a car is different, just because you know it has changed. Does the GT feel more rigid? On the smooth roads we drove the car on it isn’t immediately obvious, although with miles there’s a realisation that perhaps the rear view mirror doesn’t quiver over bumps like the standard Abarth’s is prone to do. The steering feels a little more incisive, too; how much of that is down to the roof and how much due to the reduction in unsprung mass, it’s hard to say. The Abarth’s suspension settings are unchanged, which means the ride is busy but entirely acceptable for a small sports car and the car has a playful attitude without the pronounced body roll of an MX-5. 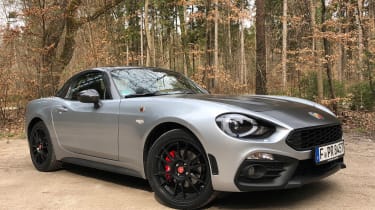 The downside of the fixed roof, other than the obvious loss of quickly being able to lower it when the sun comes out, is that - on the car driven at least - driving is accompanied by a constant creak and rattle from the roof panel. Wind noise is pronounced at speed as well, more so than with the canvas roof raised.

Otherwise, it’s business as usual for the Abarth 124. The ergonomics are still hopeless for anyone over six foot in height, but it’s a genuinely loveable car that needs neither high speeds or the right road to encourage a smile on the face of the driver.

Abarth UK haven’t confirmed pricing for the GT yet, but expect a 10% premium over the £29,565 Abarth 124 when it reaches the UK in May. While the dynamic improvements may be appealing, it’s harder to recommend the GT overall when the 124 feels sweetest when driven as a roadster - and before the price rises too high. 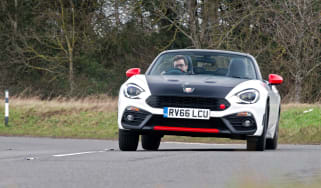