Unlikely to tempt people from their 5-series, but the ES does have merits 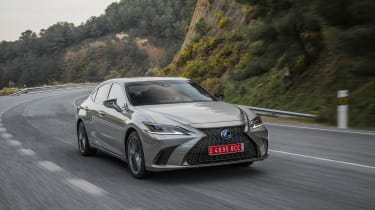 The Lexus GS is no more: meet the Lexus ES. If you’re reading this from the United States then the nameplate will be familiar to you, as the ES was, along with the flagship LS, one of the first cars the Lexus brand released when it debuted there in the late 1980s.

It’s a notable change for European markets though, the ES continuing with its traditional front-wheel drive layout rather than the rear-drive we’ve become used to with the outgoing GS.

That will, in theory, affect everything from the way it drives to the way it looks, and makes a high-performance F version unlikely – but does the ES still have merit in a highly competitive market segment, and can it still attract keen drivers? 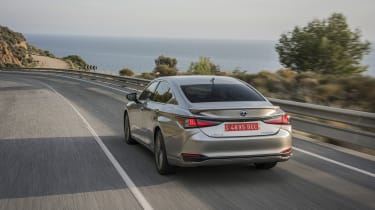 If you put much stock in a powerplant, then the ES may not be off to the greatest of starts. The sole powertrain option is a hybrid setup, based around both an electric motor-generator and a 2.5-litre four-cylinder combustion engine operating on the Atkinson cycle.

As ever, the two power sources blend together through what Lexus describes as an E-CVT, but the actual transmission is different from previous Toyota and Lexus hybrids, switching out the old planetary gearset for a transaxle that combines a parallel shaft gear, power split device, parking brake and reverse gear. The transmission software has been designed to minimise the traditional and off-putting ‘rubber band’ effect when accelerating.

The 2.5-litre develops 176bhp and 163lb ft on its own and the electric motor 118bhp and 149lb ft, though because of the different power and torque peaks, combined power is quoted at 215bhp. Like previous ESs, but unlike the GS it replaces, power is sent to the front wheels alone. 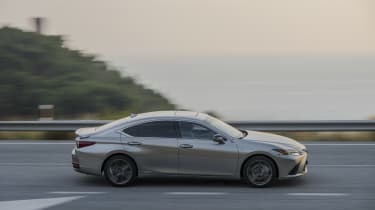 The ES uses a mix of steel and high-strength steel in its construction, with aluminium for the bonnet and front wings to reduce weight at the nose, and thinner steel used for other panels to keep overall weight to a minimum – 1680kg is reasonable, certainly for a car with a battery pack, though BMW’s entry-level 5-series is lighter still.

Front suspension is MacPherson strut and at the rear there’s a multi-link setup with trailing arms, chosen primarily for its compact layout, another factor influenced by needing to squeeze a battery in the car. The battery itself is for the first time located under the rear seats, meaning it’s both within the wheelbase and low down, giving obvious dynamic benefits.

All ES models are equipped with what Lexus calls Dynamic Control dampers, which use a valve to control movement in rebound as effectively as in compression. The idea is that through a corner the unloaded inner wheels contribute to body control as effectively when they’re extended as the loaded outer wheels do under compression. Additionally, F Sport models use an adaptive setup – Lexus claims it provides the biggest difference yet in behaviour between a regular model and an F Sport. 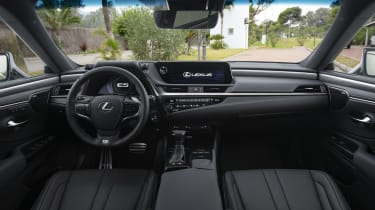 There’s no mistaking the Lexus identity inside, from well-contoured seats that were apparently the product of three years’ research, to the adoption of the instrument cowl with its pair of praying mantis-like eyes either side – controls for turning off the traction control and for adjusting the driving mode. The large, sweeping stretch of trim that contains the climate control panel looks a little cheap and Lexus persists with its frustrating touchpad-style infotainment system, but otherwise it’s a quality driving environment.

On the road, first impressions suggest the ES doesn’t feel a great deal different to the GS it replaces, and some customers may never unearth the dynamic differences that separate the new front-wheel drive car from the outgoing rear-driver.

Immediately there’s a sense of solidity and unruffled refinement to the car, the ES making light work of uneven surfaces and the light steering guiding it accurately through turns. The hybrid drivetrain simply fades into the background, both literally and metaphorically, when driving at the pace of other road users. The illumination of a green EV light in the instrument cluster lets you know when the engine is kicking in and out – at anything other than idle, you’ll probably not be aware of what’s going on underneath.

Up the pace and things begin to change. You’ll begin to hear the engine and feel its influence over the front tyres, and while the ride remains calm you’ll begin to sense some float from the suspension, even in Sport mode. Sport+ tightens things up more but it doesn’t instantly feel like a sports saloon in the way even a basic 5-series manages to do. 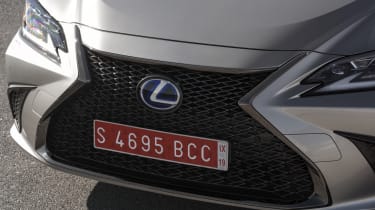 The ES is surprisingly nimble though, with tight, precise steering and a chassis that will rotate entertainingly and controllably if you back off the throttle mid-corner. You’re unfortunately denied any greater control, mainly because the CVT prevents throttle inputs from having an equal response at the wheels: a 5-series will corner harder, although the ES isn’t appreciably less entertaining than, say, a basic Audi A6.

To its credit, Lexus has engineered its E-CVT to operate less intrusively than such systems once did. Floor the pedal hard from rest and the revs build in proportion to speed, rather than soaring for the red line and waiting for the car to catch up. There’s just enough performance that you’ll rarely be on the throttle for long before you’ve reached your chosen velocity, so the typical noisy CVT mooing is kept to a minimum.

There’s no denying that the ES is at its best driven more gently though, when it’s as refined as any in the class (more so when operating in EV mode), rides better than most, and will no doubt prove a painless ownership proposition longer term. 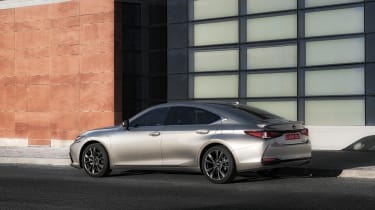 Lexus is very much pitching the ES into the same market as the Audi A6, BMW 5-series and Mercedes-Benz E-class, to the extent that in the car’s technical presentation at launch, examples of the Audi and BMW were seen in images alongside a camouflaged pre-production test car.

Both those Germans offer slightly better performance than the ES but Lexus promises strong residual values (a symptom of relatively low sales targets and not flooding the fleet and rental markets) and competitive economy and CO2. Kit levels in the Lexus are also high.

It’s fair to say a basic 5-series or E-class diesel are hardly the most engaging of drivers’ cars, so the ES’s relative focus on comfort over dynamism is easier to stomach at this point in the market. But it’s a shame the ES is unlikely to deliver us a truly engaging performance version, as the GS did with the V8-powered GS F.