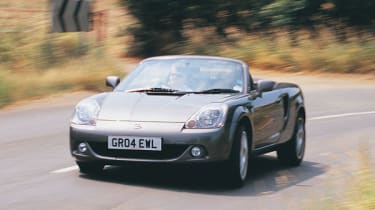 It seems like the Toyota MR2 has been around forever, and yet it's still one of our favourite junior sports cars, what with its taut looks, balanced midships layout, low mass and keen handling. However, with just 138bhp, the motor lacks that gutsy punch the fleet-footed chassis deserves. The 1.8-litre twin-cam four-pot zings freely rather than surging forward with real hard-edged aggression, and while this suits the MR2's honest character, it always leaves you wanting that little bit more.

Well, now you can have it. While you could be excused for thinking the car you see here is just another standard MR2, the discreet boot badge identifies this car as being fitted with an official TTE (Toyota Team Europe) turbo. It's not a dealer-fit option, but it can be retro-fitted by any authorised TTE centre. At £3995 fitted, it's not cheap, but it boosts the MR2's power to 182bhp.

If you're going down this route, though, you'll probably also want to consider a freer-flowing exhaust, and this car, supplied by Silverstone Performance (www.silverstoneperformance.co.uk), comes with the company's own SP system (£804 fitted), taking the power figure right up to 197bhp.

The best part of five grand is a lot of money, but you could always save yourself a few bob by having the kit fitted to a secondhand car rather than a £17,170 new one. This 19,000-mile 2004 car is a prime example, and also benefits from lower, stiffer springs, Goodridge stainless steel braided brake hoses and a front strut-brace, together coming in at around £700. Lightweight 17in SP12 alloys fitted with Toyo T1-R tyres add another £1080. 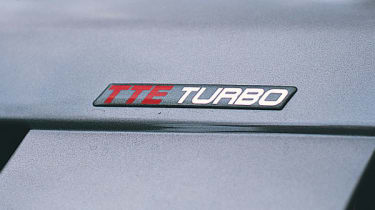 Out on our test route, the Turbo predictably delivers higher cornering speeds than the standard car, clinging resolutely to the tarmac while darting towards the heart of a bend with real determination. As you reach the apex and squeeze on the power, the nose eventually relinquishes some of its grasp, understeering gently, but keep the throttle in and the 245/35 rear Toyos are eventually overcome by the turbo's might, straightening your line as the turn ends. It's tidy, retaining similar handling qualities to the standard MR2, and allows a series of bends to be dispatched in one flowing movement.

The turbo itself has a very linear delivery. There's no big hit, just a wholesome swelling of power, particularly around 4000rpm. It was plenty swift enough to match Andy Morgan's 222bhp Focus ST camera car, and overtaking was considerably more relaxed than in a standard MR2. It's vocal too, with a prolonged warble and twitter when you lift off, a deep backbeat from the exhausts and a loud whir from the additional fan mounted directly under the engine cover to keep everything cool. It may cost a chunk of cash, but you'll always know it's there. 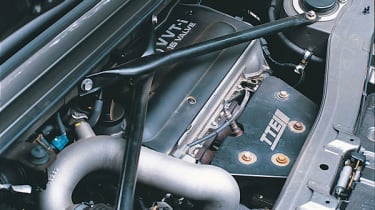 The standard gearshift suffers from the increased pace. It has always felt a little vague, but here, when you want something slick that snicks rapidly from one cog to the next, it's found wanting. But that's a small irritation; the brakes inspire confidence, while the body control is excellent. Stiffer springs could easily have caused the ride to go to pot, with the body shimmering and shaking itself to pieces, but that hasn't happened here - the bracing obviously adds significant strength.

And that's a very good thing, not only for this car but for future developments, as the engineers at Silverstone Performance are working on a new induction kit with a remapped ECU which should liberate well over 210bhp. There's certainly plenty of life left in the MR2 yet.