Following in the footsteps of the Phantom VIII, Rolls-Royce is updating the Ghost for 2020 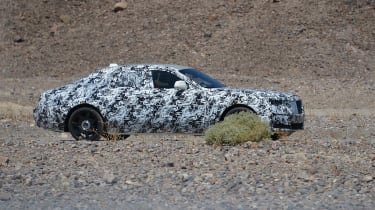 Unlike the long-standing Phantom, the Rolls-Royce Ghost has only been on our roads since 2009, and is set to enter its second generation later this year. Our photographers have spotted the updated car testing ahead of its launch, albeit with a healthy covering of camouflage.

Though it’s clear that the traditional Ghost silhouette remains, not much in the way of detail can be seen through the disguise. Under the wrap are likely tweaks to the headlights and tail lights, adding more modern, simplistic units similar to those found on the Phantom VIII. Also following on from the new range-topper will be design touches to the front and rear, keeping the Ghost up to speed with the rest of the marque’s offerings.

Interior images are still yet to surface, but design touches from the Phantom are to be expected, replacing the current car’s conventional gauges with an all-new 12.3-inch infotainment system and much more.

The real changes are expected to take place under the skin, however, with the BMW 7-series underpinnings of the first car exchanged for Rolls-Royce’s all-new ‘Architecture of Luxury’ platform, first seen in the new Phantom. A bespoke Rolls-Royce item, the new platform uses a fully scalable, all-aluminium space-frame chassis, and will be used on all next-generation models. Though its use will likely reduce weight, we wouldn’t be surprised to see the figure creep back up through the addition of new tech. 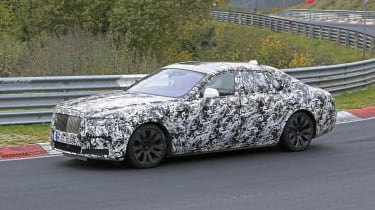 Powering the model will be an updated version of the brand’s 6.6-litre twin-turbocharged V12, with output sitting above the current 560bhp and 575lb ft of torque. An eight-speed automatic transmission is expected to help it sprint from zero to 62mph in under 4.7sec and on to a top speed of 155mph.

A full launch is expected later this year, with prices due to sit at around £200,000.