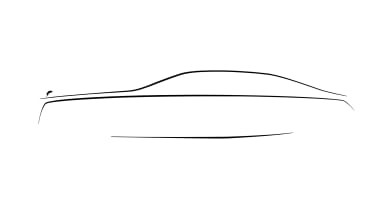 As part of a string of teaser videos running up to its reveal, Rolls-Royce has provided further details about its upcoming Ghost saloon. Like the previous model, the Ghost will be a more direct competitor to other large luxury saloons such as the Bentley Flying Spur and high-end S-class Maybachs, but will differ from its predecessor in one very critical way.

That’s because while the previous Ghost shared more than a few components with the BMW 7-series, namely its underlying structure, Rolls-Royce has confirmed the new model will be all-new from the ground up and based on the same aluminium-intensive architecture as the Phantom and Cullinan. This change of platform will not only give engineers a better baseline for its refinement and performance targets, but also give the new Ghost extra crucial distance between it and the lesser BMW models it was once developed from

It’s not just the platform which will be new though, as Rolls-Royce has also given us an insight into the Ghost’s aesthetic, which the marque promises will be less ostentatious and more contemporary than that of the larger Phantom. New, simplified, reduced design elements and details will more closely align to what Rolls-Royce considers to be modern luxury. What this actually looks like in the flesh we’ll have to wait and see…

The latest teaser reveals that the Ghost will feature both all-wheel-drive and all-wheel-steering, alongside new tech to help further improve refinement and ride quality. The result of three years of development, the new ‘Planar chassis system’ employs a trick upper wishbone damper unit mounted above the front suspension assembly that acts as a further damper on the suspension tower. Not just that, but the system is active, and uses data input from a forward facing camera system and GPS data to adjust its stiffness according to road conditions. 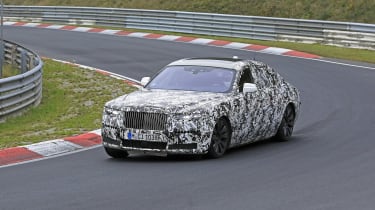 Thanks to previous spy images, we do have a basic understanding of what the new Ghost will look like, with prototype vehicles holding on to a similar set of cab-back proportions which have defined (most) Rolls-Royce models over their long history. The long bonnet, upright nose and tapering tail will remain core aesthetic hallmarks of the new Ghost, but we expect there to be new refinements to the detailing and tech.

Interior images are still yet to surface, but design touches from the Phantom are to be expected, replacing the current car’s conventional gauges with an all-new 12.3-inch infotainment system and much more.

Powering the model will be an updated version of the brand’s 6.6-litre twin-turbocharged V12, with output sitting above the current car’s 560bhp and 575lb ft of torque. An eight-speed automatic transmission is expected to help it sprint from zero to 62mph in under 4.7sec and on to a top speed of 155mph. A full launch is expected in autumn this year, with prices due to sit at around £200,000.