Updated Octavia continues to impress, if not excite 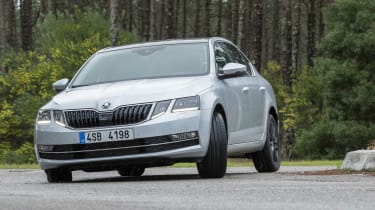 Skoda says that to call the 2017 Octavia 'just a facelift' is to understate the changes it's made to its best-selling car. Skoda is probably overstating things, as this is very much a facelift of the existing Octavia, and one that, if feedback from evo's Facebook and Twitter channels is anything to go by, hasn't been the most successful in visual terms.

But the old Octavia was always a thoroughly competent car, if not an exciting one beyond the obvious vRS models. Our vRS drive will take place in the spring; in the meantime, here's what to expect from the regular updated Octavia range.

All but the 1.6 TDI come with a six-speed manual gearbox as standard (the 1.6 uses a five-speeder), with a six-speed DSG available on every engine, depending on trim level. All-wheel drive can also be specified with the 2.0 TDI Estate in SE L and Laurin & Klement lines, while it's standard on the Scout. 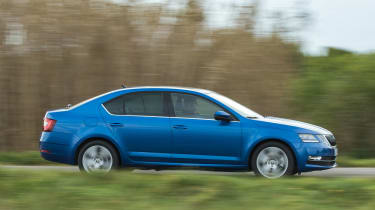 Scout models have a 181bhp version of the 2.0 TDI, which will continue to be offered in the vRS.

Changes to the latest car are minimal. Most significant is an increase in body length (11mm hatch, 8mm estate) and 20mm extra rear track, but the track changes are so slight that Skoda doesn't actually claim any benefits.

Without wishing to incur the wrath of Skoda engineers who've spent the last few years painstakingly perfecting each and every aspect of the facelifted Octavia, the fact is that the 2017 model is largely identical to the car it replaces, new engine options excepted.

To be fair, little about the old car needed fixing. It's never been the sportiest of devices - that's what the vRS is for, after all - so regular Octavias are left to the job of being refined, undemanding to drive, yet conducting themselves in a manner that suggests a car of greater class than the Skoda badge implies.

Some things make themselves apparent immediately: The ride is mature, dealing with rough surfaces well without feeling too floaty if you surprise the car with a corner. The steering is good too - it has a smooth, friction-free feel and accurate responses. Very little road feel makes its way through the rim, but the way steering effort increases with cornering load is very natural, which is an acceptable surrogate for proper feedback. It's also as grippy as you're likely to need given each car's performance. 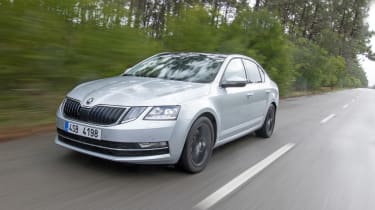 As is increasingly the case, the three-cylinder TSI proved the sweetest of the bunch. It won't satiate speed freaks but what it lacks in performance it makes up for in enthusiasm, and the bubbly little three-pot adds a layer of character you'd not expect to find in a car of this type. It settles down to almost silence at a cruise and doesn't filter vibrations back into the cabin, but you'd enjoy spinning it to the red line on every journey. Fun, but probably ruinous for economy...

Most will probably end up buying (or more accurately, being given) the 2-litre TDI though. A less powerful version of the unit found in our previous vRS long-termer, it neither sounds as sporty nor feels as punchy as the vRS, but the DSG 'box does feel better matched than it used to - in its automatic mode, changes seem calibrated to use the unit's substantial torque, rather than dropping two or three ratios as if it was attached to a petrol engine.

Bottom line: The Octavia isn't a car you'll take out for a weekend thrash (at least in non-vRS trim), but if you're forced into one as part of a company car scheme you probably shouldn't sulk too much. 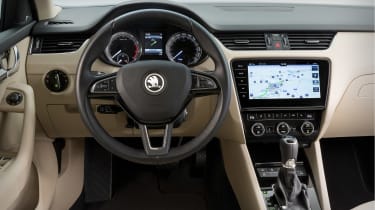 Opt for the 1.0 TSI hatchback in S trim and the Octavia range begins at £17,055. You'll pay similar for superminis these days so Skoda still clearly represents good value, especially considering just how much space the Octavia offers. DSG adds £1250 across the range and trading up to the Estate is a £1200 jump.

The Octavia's list of possible rivals is vast, but few in the Skoda's price range are quite as substantially-sized. One that gets close is the new Honda Civic, tested recently and also offered with an energetic 1-litre three-cylinder engine. The Civic feels the sportier of the pair, the Skoda more grown-up, but both are worth a look if you're after a well-built and sizeable family car.