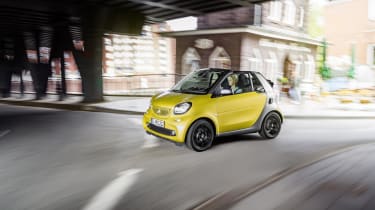 Twelve seconds is all it will take to transform the new Smart Fortwo Cabrio from a closed-roof city car to open-topped cruiser when it goes on sale in February 2016.

The new car will made its debut at the Frankfurt motor show in September, as the next stage in Smart’s expanding model line. Pricing starts from £13,625 on the road, which puts the Cabrio £2140 above its hard-topped equivalent.

Little beyond the price and the roof differentiates the new Fortwo Cabrio from its coupe sibling. At 2.69m long, 1.66m wide and 1.55m high it shares the coupe’s dimensions – similar in length and height but wider than its predecessor, and the ‘Tridion’ safety cell still provides a visual indication of Smart’s efforts to make such a small car safe.

Likewise, the Cabrio utilises the same brace of three-cylinder petrol engines as the regular car. The entry-level power unit is naturally aspirated and displaces 999cc, developing 70bhp and putting 67lb ft of torque through the rear wheels, while a 898cc turbocharged three-pot is also available, with 89bhp and 100lb ft at its disposal.

Neither is fast but the turbocharged model gets closest, reaching 62mph in 10.8sec from rest and bouncing into an electronically limited 96mph. Transmissions continue unchanged too – each is available with either a five-speed manual transmission, or five-speed dual clutch – banishing the old, jerky automated manual to the mists of time.

Smart says its latest Cabrio is its most rigid ever. Torsional strength is up 15 percent compared to its predecessor, while extra reinforcement ensures the body loses little of the closed-roof car’s stiffness. 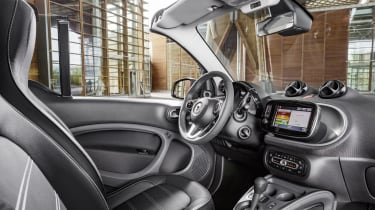 No weight figures have been confirmed, but it’s likely to be more than the 880kg of the coupe models on account of the extra reinforcement and the electric roof mechanism.

As well as opening and closing quickly, drivers can spread sunlight into the Smart’s interior at the touch of a button on the key, while like previous Smart cabriolets, the open-air experience can be further augmented by removing the two roof bars that span the A and B pillars.

Cabrio models will be available in three trim lines, Passion, Prime and Proxy, with options including MirrorLink smartphone integration, a wind deflector, and an Urban Style package that lowers the car and adds black wheel arch linings.

We’d not expect that to turn the Fortwo into a sports car – though we were still enamoured by the car’s sense of fun in our first drive of the coupe. However, a Brabus model is also expected soon, which should add a dynamic touch to the much-improved Smart’s talents.

The range starts at £13,265 for the 70bhp car in Passion trim, which nets you 15-inch alloy wheels, climate control and a jazzy interior colour scheme. Prime starts from £13,960 (or £14,555 for the turbocharged car) and gets leather heated seats and a couple of extra dashboard instrument pods.

Proxy spec, priced identically to the Prime models, gets 16in alloys, a blue and white interior and a Sports package with a perforated leather-trimmed wheel, metal pedal facings, an exhaust finisher and 10mm lower suspension. Automatic cars are £995 more than manuals across the range.