Brabus Ultimate 125 - The most extreme Smart Fortwo yet 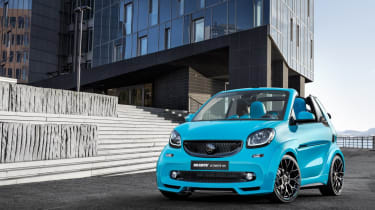 Brabus is best known for its 200mph-plus Mercedes saloons, but for the past decade and a half it's also been associated with hotted-up versions of cars from Daimler's city car brand, Smart.

The Brabus Ultimate 125 is the latest take on the theme and the most extreme yet, taking the regular Brabus Fortwo and building upon it with more power, a wide body kit, and a huge colour palette allowing owners to tailor the cars to their tastes.

The latest in the Brabus Ultimate line (which started in 2004 with the Ultimate 101, and continued through the Ultimate 112, Ultimate R, Ultimate Style and Ultimate 120) will be limited to 125 examples and conveniently, also produces 125PS, or 123bhp in old money.

Its engine is based on that of the current Smart Brabus Fortwo, which itself uses an 898cc Renault-sourced turbocharged three-cylinder, shared with the Renault Sport-tweaked Twingo GT. An improved induction system has helped liberate the extra power.

The Ultimate uses the standard car's six-speed dual-clutch automatic transmission too, but shorter ratios and the extra power allow it to chop three tenths from the 0-62mph time, now 9.2sec, and add 6mph to the top speed, for 109mph. 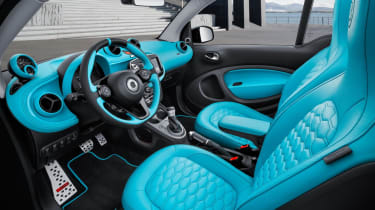 Not a huge performance increase then, but it's likely the Ultimate 125's 125 customers will buy the car based largely on how it looks, and by how much they're able to personalise the styling to their tastes.

A "Widestar" wide body kit is available, and Brabus has somehow squeezed 18-inch wheels under both arches (the standard car uses 16in up front and 17in astern). The track is wider too, and Brabus has used lower springs to bring the teetering city car closer to the tarmac. A triple-exit exhaust replaces the two separate standard tailpipes.

The colour is even more striking, though the blue car in the images is just a taster - Brabus says the exterior paint finish, the soft-top colour on the Cabriolet and the entire interior trim are all up to the buyer's choice, so expect some truly wild combinations of metallic paintwork, canvas and leather.

We'll do the calculation for you: that's roughly £43,100 and £45,600 at current exchange rates. Such is the price of exclusivity, and it allows the Ultimate 125 to join the realms of Aston Martin Cygnets and Abarth 695 Tributo Ferraris in the pantheon of preposterously-stickered small cars. Still, as a way to negotiate city traffic...