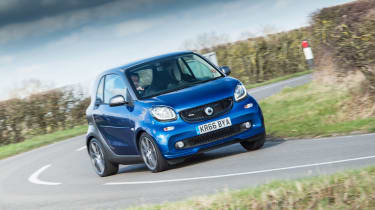 Smart has certainly moved the game on with a refreshed look to the Fortwo’s interior compared to the previous generation. The centre console and dash design look much more appropriate for the 21st century, although cheap, hard-touch plastic trim is still present - fine at the Fortwo’s entry point, but harder to reconcile with at the higher price of the Brabus.

The pod-like rev counter is a nod to the similarly alienesque instruments in previous generations of the car, and given the equivalent Twingo doesn’t even offer one as an option, it’s a useful addition. The floating seven-inch sat nav come infotainment screen is easy to use via the touch interface too, and while it’s not cutting-edge technologically, it’s useful enough. 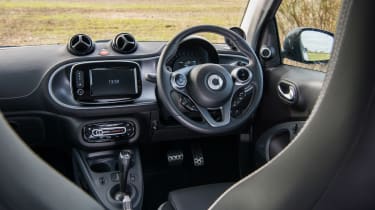 Despite its diminutive size there’s plenty of space for two occupants inside the Brabus Fortwo, with unencumbered ingress and and egress thanks to the wide doors. A relatively lofty driving position results, and makes you feel considerably less vulnerable than you’d expect - at least until you catch a glance of how close the rear window is to the back of your head. Even so, the Brabus feels chunkier and more grown-up than its predecessor.

The 260-litre is adequate for shopping trips and weekends away but might struggle for a full two-up holiday, and in such a short car the carrying capacity can be affected depending on how tall you or your passenger happen to be.