Needs stoking to do its best work, but even then the rewards aren’t huge. Quick enough, but can feel a little flat day-to-day 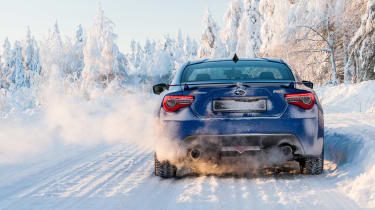 Nail the perfect launch and the BRZ will spring itself to 62mph in 7.6sec, topping out at 140mph. The automatic model will follow six-tenths of a second behind, and stops accelerating 10mph earlier. But to get the most out of the BRZ, and for it to feel anywhere near as quick as those numbers suggest, you really need to rev its engine.

If you’re caught off-guard, encounter a hill, or want to overtake without sufficient preparation, then the BRZ’s peaky delivery can be frustrating. But the responsive and linear nature of the engine at the top of the rev range makes it very satisfying to drive the BRZ quickly. It’s a characteristic not unknown to naturally aspirated Japanese performance cars – the old Honda S2000 and Mazda RX-8 both had engines that needed to be kept on the boil, so if you’re coming to a BRZ having owned either in the past, it probably won’t be an issue.

The Subaru does have a distinct flat spot around the mid-range that initially deters you from exploring the upper reaches of the revs and can make day-to-day driving slightly frustrating, but once you push beyond it the relatively close-ratio gearbox makes it easy to keep the needle in the top third of the rev counter and above the flat spot. And as we’ve already mentioned, it’s a great manual change, with a satisfyingly mechanical action.

The biggest issue with the engine is the noise it makes. It’s quite industrial to begin with and sounds surprisingly rattly at idle, though very little vibration makes it through to the cabin, so the rough nature is more an aural characteristic than anything.

As the revs rise there’s a faint, throaty grunt that hints at an old-school Subaru flat-four, but without unequal-length headers and a huge turbo that distinct burble is only very faint. Again, the sound is probably best right at the top of the rev range, where the engine will rev with remarkable smoothness if you let it.