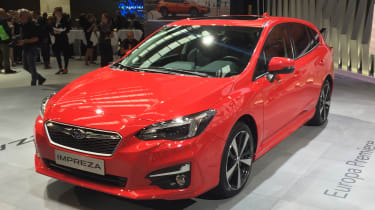 Subaru has introduced its all-new Impreza hatch at the Frankfurt motor show, featuring an all-new platform, body and interior. This is not the first time we have seen the new car though, having been on sale in other markets for upwards of six-months, but the Impreza is an important step for the Japanese marque.

The main reason for this is its all-new platform, one which will go on to underpin the entire Subaru range. You’ll be glad to hear this platform is still underpinned by its trademark combination of a horizontally-opposed engine and all-wheel drive.

> Click here for our reveiw of the latest VW Golf

The new Impreza may look similar to the previous car, but the changes to its body-in-white are substantial, with the new hatch sitting 10mm lower and 35mm wider and on a longer wheelbase (by 25mm), too. 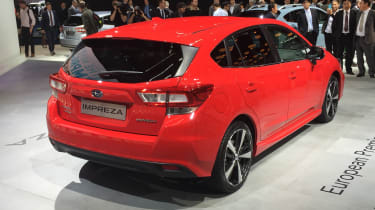 Subaru’s focus for this new platform was to improve structural rigidity and stiffness, something Subaru’s engineers say has been achieved in this new generation. Aside from improved handling, Subaru says this also goes some way to closing the gap in regards to refinement against rivals like the VW Golf.

As far as engines are concerned, Subaru has confirmed two choices, a 152bhp naturally aspirated 2-litre flat-four petrol engine, and a smaller 112bhp 1.6. This bucks the class trend of radical downsizing and will be connected exclusively with a ‘Lineartronic’ CVT gearbox. Sport trim models will also benefit from a torque vectoring system, with the intention of improving agility and overall handling.

The Impreza’s interior is far more resolved, dramatically improving on quality and design over the previous model. 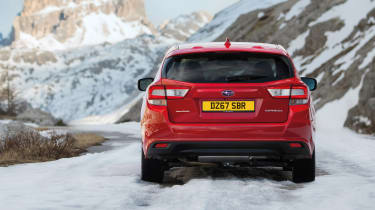 Subaru has continued its commitment to safety in the new car, with a 40 per cent increase in crash energy absorption, EyeSight collision avoidance technology (which uses a camera to monitor the road ahead – also allowing for adaptive cruise control, lane-departure warning and several other functions). Interestingly, Subaru also says its latest platform will support autonomous driving technology in future.

Other tech features include Steering Responsive Headlights (which angle the beam in corners for a better view) and Reverse Automatic Braking to stop you clattering into objects when reversing.

With a future WRX STI to be based on this same platform, even if the new Impreza fails to grasp the attention of Golf and Focus buyers at a mainstream level, it might give us a clue into its future capabilities. Either way, the Impreza represents a major leap forward for the quirky Japanese manufacturer.