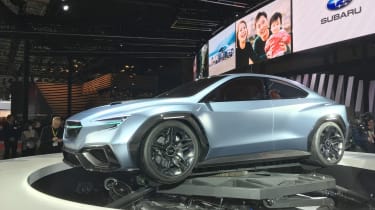 Subaru has pulled the covers off its Viziv Performance Concept car at the Tokyo Motor Show, showcasing its new high-performance saloon car scheduled for production in 2020 and the first of what will be a series of a new generation of Subarus.

Drawing on inspiration from its Legacy, Impreza and WRX rally and endurance racers, the Viziv Performance Concept will be powered by the next generation of boxer engines currently under development by Subaru and will retain the company’s four-wheel drive system.

Measuring 4630mm in length, the Viziv Performance Concept sits on a 2730mm wheelbase and is just under two-metres wide and stands 1430mm in height. What does this equate to? Think BMW M3 (height aside, but’s it’s a concept show car so needs to be stand tall to be seen) in terms of proportions. You can expect a coupe, estate and SUV on the same platform 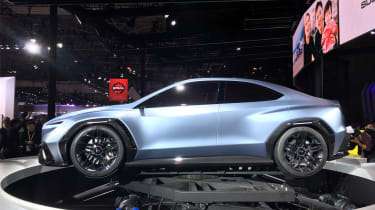 With carbon fibre and CFRP used in the body’s construction and for items such as the front wings, roof and bumpers, Subaru is targeting a low centre of gravity and light weight for its next generation of performance cars - scheduled for launch in 2020.

However, by sticking with its familiar flat-four engine, Subaru’s next generation of cars will undoubtedly retain the appeal that has generated such a loyal following in recent decades.

> Click here to read about the production Subaru Impreza hatchback

But the boxer configuration isn’t the most emission friendly, and with Subaru already confirming an electric car for 2021 and its next Forester SUV expected to be offered with a hybrid powertrain, the Japanese firm may be forced to turn to hybrid technology if it’s to continue to offer the outright performance expected of its sports saloon. 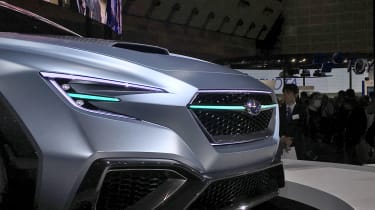 That said, it’s undoubtedly one of the stars of the show floor in Tokyo, looking more like a Lamborghini vision for a compact saloon than anything we’ve seen from Subaru in recent years.

The proportions are more akin to a fastback than they are a traditional three-box car, but that’s no bad thing, as the steeply raked roof and short tail give the Viziv a seriously purposeful stance.

Some traditional Subaru styling cues are present and correct, such as the oblong grille design and a sizeable bonnet scoop, no doubt feeding a top-mounted intercooler, but the rest of the styling is far more dramatic. 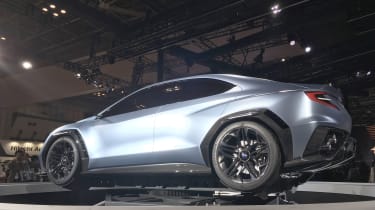 Large alloy wheels wrapped in sticky Bridgestone tyres are squeezed under each arch, and while black-rimmed arches are the kind of cue we’d expect to see on a crossover rather than a sports saloon, they seem to work here. It probably helps that the front and rear fenders they sit underneath are absolutely enormous, with blisters to rival Group B machinery.

At the front Subaru has maintained its “hawk eye” LED headlamp signature, but they’re augmented with a turquoise illuminated strip that spans both headlights and the grille. At the rear we’re seeing more than a hint of the new Honda NSX, but the large stacked tailpipes and diffuser both lend personality and intent to the rear of the car.

This Impreza and Colin McRae formed one of the most iconic pairings in World Rally Championship history. Now it’s Henry Catchpole’s turn to get behind…