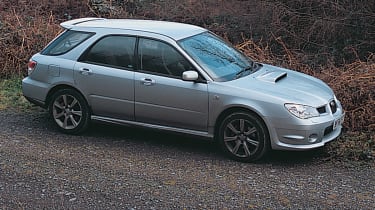 The first time Subaru entered my consciousness was when I was four years old – a farmer at the top of the village owned a red Legacy estate. It was written off when one of those huge, cylindrical straw-bales broke loose and rolled down a field into the side of it.

After that I didn’t think about them for quite a few years (Subarus that is – I’m still wary of round bales), not until a certain Mr McRae came along. Then it was all mud this, RAC that. I remember just how much I wanted a Series McRae Impreza. I’m sure I wasn’t the only one. In fact I think it’s fair to say that rallying made Subaru cool in a way that no marketing team could ever have dreamt.

Anyway, I’d never been to a rally before (always wanted to, but rather like learning Italian and writing my first book, I’ve just never quite got round to it) but I thought it was about time I went to a Subaru’s spiritual home. So, when whilst compiling the evo Diary a few months ago I noticed the Grizedale Stages Rally, I resolved to pack a Thermos and get up to the Lake District.

As a result, on a filthy Friday in December I found myself driving up the M1, blatting westwards across the Yorkshire Dales (where the WRX proved to be quite incredibly adept at dealing with the oceans of standing water on every corner), eating award-winning fish and chips in Sedbergh, yomping up the Old Man of Coniston and propping up the end of a bar in a pub in Hawkshead, before falling into a very comfortable B&B.

Saturday morning fortunately dawned bright. It was just five quid for a rally programme, which you bought through the window on your way in to one of the car parks. This apparently served as your ticket and was your entire outlay for the day. Bargain.

And now for my first lesson learned: when it says on the programme ‘15–30min walk to the stage’ they’re not kidding (unlike the signs to gates at big airports where 25 minutes is in fact about three for anyone who isn’t drunk or scared of moving walkways). Half an hour later, after stomping up a steep muddy path through thick, moss-carpeted woods, I reach a quiet unmade road. A couple of people have turned left along it and are walking on one side, so I follow them. As I pass a sign on a stick saying something about death and liability, it dawns on me that I’m doing the equivalent of strolling along Hangar Straight at Silverstone. On a race weekend. During a race.

A little distance away a whistle shrills in the still air. The couple ahead scuttle off amongst the pine trees and moments later an ’02 Focus WRC rips past, flinging stones and mud behind it. Blimey. I press on for the spectator area, which has some pretty coloured ribbon denoting those areas where you can stand and those areas where you’ll get apple-sized stones thrown at your head.

These official demarcated areas are usually on a hairpin bend so are worth stopping at for a bit, but the real fun is to be had by heading off into the wilderness where other spectators thin to a dribble and then disappear altogether. Out here it’s a bizarrely wonderful mixture of tree-hugging and motorsport, tranquillity and something that sounds like the opening battle scene from Gladiator.

You hear each car long before it arrives, bangs and small explosions reporting disorientatingly through the dark mass of trees. And this orchestral prelude has your imagination flickering with images of what’s happening as they approach. MkII Escorts arcing around hairpins. Evos standing on their noses as they slither into braking zones. The odd Talbot brightening the place up. A lone Metro 6R4 making the hairs stand up on back of every neck it passes. A sprinkling of 205 GTIs nipping from apex to apex. And, of course, lots of Imprezas tearing up the very foundations of each stage to the soundtrack of that distinctive boxer warble.

Driving back through the Southern Lakes at the end of the day, my own Impreza’s flat-four beating gently away, I was utterly smitten with the whole event. It was better than I had dared hope and I’m now determined that when I do a project car it’s going to be for rallying. The WRX should also undoubtedly stay dirty from now on. Much more McRae, that way.