A visit to the Isle of Man necessitated a fast chase car. Enter Subaru's Impreza WRX 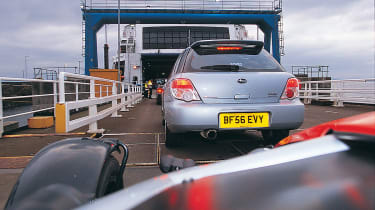 If, as we did last month, you’re going to chase an Ariel Atom around the Isle of Man trying to get photos of it, you’re going to need a pretty quick car. Crucially, given the lack of boot space in the Atom, it will also need to be able to swallow a huge volume of stuff. Step forward and take a bow BF56 EVY.

Despite the fact that it fits easily into a normal parking bay, the five-door WRX consumed enough gubbins to make a family of travelling hillbillies look like light packers. Sufficient cameras, tripods and flashes to sink a small frigate, more video equipment than it took to film Planet Earth, numerous bags of wet-weather clothes – it all went into the Scooby without a problem.

The drive from the evo mothership in Northamptonshire to the ferry at Troon was dispatched by Roger and Kenny without drama in half a dozen hours, and as I emerged from the bowels of The Harbour Bar, where I’d been thawing out waiting for them, the bluish beams of the xenons heading towards me looked comforting and I felt a curious warmth towards the ugly old thing (although that might have been induced by the pint of guest beer I’d just sampled).

Steering lock isn’t of the taxi driver-impressing variety in either the Subaru or the Atom, and the P&O ferry’s maze of ramps required a bit of comedy shunting back and forth to reach our final parking place, right at the back. At least the Subaru was able to obey both parts of the request to ‘park in gear with the handbrake on’ – for some reason our Atom was lacking a handbrake…

We arrived on the Isle of Man while it was still dark, and the only directions we had were a few hieroglyphs and misspelt place names that I’d scribbled on a scrap of paper. I wasn’t too concerned, though, as we’d brought along a TomTom One XL that had come in to the office for review. The £279 gadget is an excellent bit of kit – just like the standard TomTom One, in fact, only slightly bigger. However, the Isle of Man seems to be something of a cartographical black hole and unfortunately wasn’t on the TomTom. (I checked when I got back and it’s not on any map services on the web either.) So hieroglyphs it was.

Next morning, just as I was clambering into the Atom-cum-paddling-pool, I heard Kenny shout to Roger ‘Turn the heater up to full will you?’ Sensitive, really sensitive…

The Scooby’s slim body was ideal for slipping along the narrow, bumpy Manx lanes that seem to hail from a bygone age, while the elasticity of its PPP’d, 310lb ft punch was perfect for dispatching any dawdling bikers. The damp, foggy runs over the mountain were slightly more secure in the all-wheel-drive Scooby than the mental, zizzing Atom too. Roger returned genuinely impressed with the WRX, although he did echo the opinion of others that the brakes could do with more bite, especially at the top of the pedal’s travel. One tank of substandard fuel also had a noticeable effect on the flat four, making it feel rather… er, flat.

The final advantage was that, with EVY not being a big-winged, gold-wheeled special, it didn’t upset the baggy-bottomed men in leather. All in all, the perfect TT chase car.