Never a great looker but a superb all-rounder. Long faces for the team as the Impreza returns to its maker 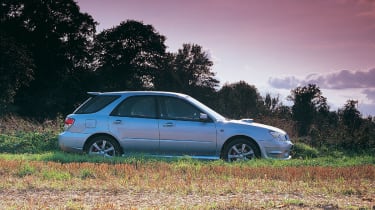 If there were Oscars for cars then the Subaru would undoubtedly be sitting nervously at its table when the envelope was ripped open for the 2007 ‘Best Car in a Supporting Role’ award. The Vectra VXR would obviously get a nomination for its tireless duty lugging Andy’s camera equipment about. The Clio 197 would take a bow for its selfless work as ‘the other car’ to the Zonda’s leading lady. And after its recent bit part in Top Gear, the Swift would also have to be a challenger.

But I think our WRX wagon should be the one up behind the mic, warbling emotionally, trying not to set off its headlamp washers. It has faultlessly lugged cameras around Europe, chased bikes on the Isle of Man, tackled every kind of special-effect weather you can think of, and hammered round circuits and roundabouts alike. And it’s done it all very, very quickly but without an attention-grabbing big wing or gold wheel in sight.

When the Subaru nosed quietly into the car park a year ago we were all amazed at how small it was. And ugly. Ice Blue was a colour previously only available on the limited edition WR1 and it seemed like an interesting choice – until the car arrived. After a year of jibes about my ‘girly baby blue car’ I think black might have been better.

To an Audi designer, sitting in a Subaru would probably be considered worthy of inclusion in the Geneva Convention, but the interior of ours stood up well to a year of being lived in. The silver plastic and stout upholstery weren’t worn at all and everything was still attached. And after standing in a forest watching the Grizedale Rally it was nice not to have to worry about how I was going to get mud off cream leather. That said, the A-pillars seemed a bit spindly compared with more modern designs, and a tape deck isn’t the most cutting edge way to get music on the move, even if it did allow me to revisit some old TDKs.

The Scooby’s huge square key took up rather a lot of pocket space, and having just the one button for both locking and unlocking was occasionally troublesome in that it was quite easy to press it twice, thereby leaving the car unlocked when you wanted it locked. You could also be sure that anyone borrowing the Impreza would set the alarm off if the immobiliser timed-out (for reference, you turn the key all the way on, then press the button). But the WRX would always come back from a temporary custodian with a glowing report, although people always seemed slightly surprised at how good it was, like the class troublemaker had just got straight A-stars.

In truth, EVY did have a secret weapon fitted to its 2.5-litre flat-four a few months after its arrival – a Prodrive Performance Pack. This took power from 227bhp to 266bhp and, more importantly, torque from 236lb ft to a new-M3-beating 310lb ft. One result of this was a drop in 0-60mph time from 5.9 to 5.3sec, but the more appreciable effect was a new fifth (top) gear 50-70mph time of 4.7sec compared with the standard car’s 6.6. The PPP also came with a more suitably diametered exhaust, which restored some, if not all, of the old 2-litre WRX’s warble.

Despite being endowed with the sort of pace (not to mention load-carrying capacity) to make an STI blush, the Subaru stuck resolutely to the same 26mpg average achieved before the £1700 kit was fitted. This was largely down to the fact that you could carry a gear higher and luxuriate in the torque. That, however, was about the only good thing you could say about the fuel consumption, because the relatively small tank meant the effective range was just 250 miles. The WRX didn’t like 95 RON either, but did feel particularly perky on Tesco 99 (generally a good chunk cheaper than its other favourite, BP Ultimate).

From very early on the brakes were something of a weakness on our car, with a softness at the top of the pedal’s travel, then, once they started to bite, power that didn’t quite feel on a par with the rest of the car’s performance. However, they were much better once new pads were fitted up front and we know other WRXs have perfectly good brakes, so we can only assume BF56 was a rogue case. You did want to use the brakes too, particularly to set the tail moving in a corner so you could then hold it on the power in a lovely neutral-to-oversteer balance.

The WRX had three services; one at 1000 miles to change the special running-in oil (£44 – labour was free), a second at 10,000 miles (£165), and a third at 20,000 (£341, of which £140 was for sprucing-up the brakes). In between services I checked the dipstick regularly and topped up accordingly, but I could probably have left well alone as I never exhausted the litre of oil that came supplied with the car. Even better, the Bridgestone Potenza RE050s lasted the distance too, though only just!

Pace, poise, practicality and price is the sort of wish list from which you usually have to settle for three out of four, but not with BF56 EVY. The only thing it didn’t have was any panache when it was standing still. But then our WRX PPP wasn’t the sort of long-termer to seek out the limelight.