Sorry folks - the BRZ tS gets no STI tweaks to the engine, no extra power, and is bound only for the US 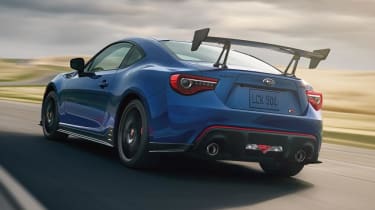 Ever since we first drove the Subaru BRZ way back in 2012, we’ve longed for a more aggressive, faster and more exciting version. That’s a set of attributes that Subaru’s high-performance division, STI (Subaru Tecnica International), has become known for. Unfortunately for us, it seems we'll have to wait for a full-fat STI model. Despite a recent teaser image showing a BRZ's spoiler with the letters 'STI' tellingly picked out on the side, it seems that the new model is in fact the Subaru BRZ tS. 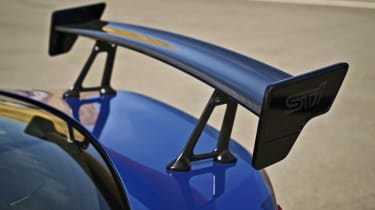 tS stands for 'tuned by STI', but don't let that get you too excited about the prospect of a hotter BRZ. In fact, the changes STI have made don't touch the engine, and it remains the same 197bhp 2.0-litre 4cyl boxer unit as before. Instead, STI has been let loose on the suspension and aerodynamics of the car, with an end result that promises to be more controlled and stable.

> Find out what the Subaru WRX STI is like to drive

New dampers and coil springs are fitted at the front, while flexible V-struts sit in the engine compartment. The chassis has also been tweaked with new draw stiffeners. The tS's cabin gets special leather and alcantara upholstery with red accents.

On the outside, it's impossible to miss the enormous (and misleading!) rear wing, which is built from carbon fibre. The tS also gets a set of rather tasty 18-inch lightweight alloy wheels, with Brembo brakes behind. The wheels are shod in Michelin Pilot Sport 4 rubber, which could be one of the most interesting changes - we found in previous tests that a set of serious tyres improve the BRZ no end over the standard eco-focused tyres.

The worst thing about the tS, though? It's not coming to the UK. INstead, its being launched in the US in 2018 alongside a special WRX STI model, and will be limited to just 500 units. 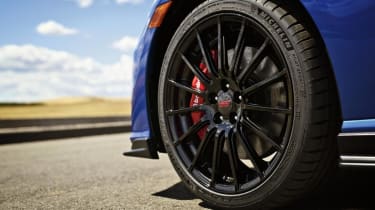 Subaru has been teasing us with the prospect of a hotter BRZ for some time. In 2013 the Japanese brand released pictures of an STI concept for the coupe and then, at the 2015 New York auto show, it showed an even more aggressive looking show car, resplendent in blue with wide arches, twin central-exit exhaust pipes, lightweight wheels and a huge wing.

> Read our full review of the Subaru BRZ

Spy shots appeared to confirm this, but it seems they were simply pictures of the BRZ tS. While we can't form a full judgement on the tS without going for a drive, it's difficult not to be disappointed when we expected a full-fat, STI-tuned model. We can but live in hope that such a car is in Subaru's pipeline.