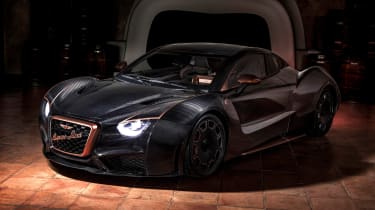 Hispano Suiza’s heyday was already over before the golden age of motoring began in the 1930s. The name made a brief reappearance in the early 2000s, but it took until last year’s Geneva motor show for an all-new production model to appear.

That car, the Hispano Suiza Carmen, was described as a “hyperlux” grand tourer, using a carbonfibre structure and high-performance electric powertrain, and was named for the granddaughter of the reborn company’s founder.

This year the Carmen is back once more, in the form of the Carmen Boulogne. Like the Carmen name, Boulogne has significance to the brand, having been the location of the 1921 George Boillot Cup, where a Hispano Suiza H6 Coupé achieved three consecutive race wins.

The company describes the Boulogne as the next stage in the evolution of the Spanish luxury car brand, and pays homage to the company’s competition heritage – though as a high-output electric car, it has much more in common with the very recent past than any of Hispano Suiza’s 1920s racers.

It does at least look more original than many of the electric hyper-wedges we’ve seen recently, and in Boulogne form the carbonfibre structure is clothed in clear-coated carbonfibre panels, showing off the weave below. Copper-coloured detailing abounds, contrasting with the classical look of the Hispano Suiza logo in the grille, and the retro-style wheels.

The exterior finish hides several enhancements that elevate performance beyond even the standard Carmen shown last year. Widespread use of carbonfibre has cut weight by 60kg, now down to a not-unreasonable (for an electric car, at least) 1630kg, while the double-wishbone front and rear suspension has been revised for tighter handling.

The ease of extracting more power from an electric drivetrain means output has climbed by a significant 94bhp to 1099bhp, adding 25mph to the top speed (now 180mph) and cutting the 0-60mph time to 2.6 seconds. The car has been built in conjunction with QEV technologies - perhaps not a big name in the wider automotive world, but a firm engaged with WRC, WTCC and Formula E, alongside more experimental projects.

With a price of €1.65m (£1.44m at current exchange rates), plus taxes, it’s par for the course on price alongside the ever growing crop of hypercar EVs, though only five Carmen Boulogne models will be available, joining the eventual 14-car tally of the regular Carmen.