New generation Suzuki Swift is spotted out playing in the Snow 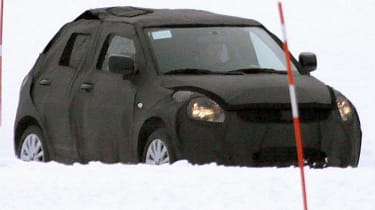 The all-new Suzuki Swift has been nabbed out testing in the snow, ahead of an apparent Autumn 2010 launch at the Paris motor show.

While the disguise is heavy, there's some tell-tale Swift features at the curvy front end and taut rear overhang. The rear lights, should these be the production items, are now classy clear lens units with the back of the car still reminiscent of the Mk2 Renault Megane, though that's no bad thing.

The Swift is a car we previously wouldn't have got worked up about, but the cracking Suzuki Swift Sport hot hatch (which Richard Porter ran on the evo Fast Fleet for a while) has changed all that. The good news is there'll be another one, as well as a European sales-friendly 80bhp diesel and the possibility of a hybrid. Watch this space for more updates.

You can also read about how our tame rally driver Henry Catchpole got on racing in the Suzuki Swift Sport cup.