Good for a trundle and competent when the bar's raised. A true miniature hero 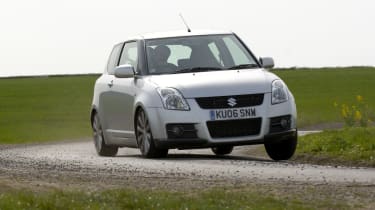 It’s always a pleasure to discover a car that hasn’t got a zillion horsepower and the front profile of a doorstop but which is still able to give you a full glass of fun. During eCoty 2006 (evo 099) we got the distinct feeling that the Swift Sport was one of those cars, and after living with one for a year I’m now in no doubt that this is an underrated gem.

Offering 123bhp and, more tellingly, just 113bhp per ton, the Swift was not a quick car, but the crucial thing was that it felt faster than it actually was. Only when you realised you were having to put in a bit of work to see off angry vans and bimbling Astras from the lights did you realise that its short gearing and free-revving, buzzy engine had duped you into thinking it had more zip. But when you got to a corner the Suzuki was more than capable of punching above its weight. There was a good bit of body-roll, but also plenty of grip, which faded gently into a lovely and satisfying four-wheel drift. Only the steering let the side down, lacking the perkiness that would match everything else about the car.

Like any good hot hatch, the Swift was as practical as it was amusing to drive. It was possible to squeeze a surprising amount of people and their stuff into its short, handsome shell. It was dependable too. It used absolutely no oil and the only glitches were a tiny rattle from the driver’s door (fixed when it went in to have an iPod dock installed) and an mpg readout that got stuck in unfathomable litres-per-100km mode after a stint as a prop car in the Top Gear studio when someone left the headlights on and flattened the battery.

Actually, not being reminded of the fuel consumption was no bad thing, since thirst was about the only blob of snot on an otherwise clean sheet of practicality. You’d hope to get more than around 30mpg from a tiny, 1.6-litre-engined hatch, especially one that demands 98 RON juice. Blame the Suzuki’s sparky character, which encourages you to drive everywhere like you’re being chased.

For under £12,000 it’s hard to think of another new car that could give you such a mix of usability and giggles. A Mini One would feel sluggish and leaden by comparison, its lack of fizz in no way covered up by a nicer interior. Not that the Swift, with its decent climate control, uncannily crisp instrument lighting and refreshingly simply keyless start, was an unpleasant place to be anyway.

The Swift’s only other rival in Warm Hatch World is the Fiat Panda 100HP, £1500 cheaper to buy and a car much loved round these parts, but one which I think can’t match the Suzuki for all-round ability. The problem with the Panda is that there are certain things – ride and a bit of finesse to the handling in particular – that the basic 1.2-litre versions do better. Whereas the Swift, from its eager engine and finger-snap gearchange to its well-judged ride and sweet handling is undoubtedly better than its shopping-run brothers.

It was, and is, a likeable, happy little car. One that’s good at the everyday trundle but equally in its element when you want to spank its tiny hide. In other words, a true miniature hero.