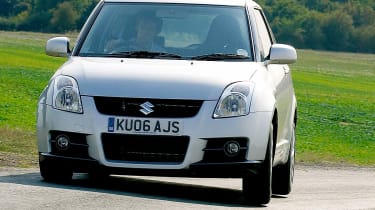 Try to think of a Suzuki car and you’ll probably think of something like a Wagon R. And I’m fairly sure that the thought of this Driven didn’t get you as excited as the prospect of reading about a new Renault or Citroën hatch. Yet the Suzuki Swift is currently holding first and third places in the Junior World Rally Championship, and the company that builds it also makes arguably the best superbikes on sale today.

So can the new Swift Sport raise the profile of Suzuki’s cars? Well, first impressions are good. A rear wing, deeper bumpers and twin tailpipes are all regulation add-ons, but sometimes sporting models look as though they’ve had such appendages thrown at them, possibly from a great height. Not so the Swift Sport, which carries off its new appearance with aplomb, looking neat and cohesive.

Entry is keyless, so the big lump of a ‘key’ need do nothing more than create an embarrassing bulge in your pocket. (Curiously, though, starting is still achieved by twisting something on the steering column.) Inside, it all feels well screwed together and the steering wheel is just the right size. The needle on the rev-counter even swings round from a six o’clock starting position as it would on a GSX-R.

The 1.6-litre twin-cam VVT engine (which forms the basis of the rally car’s engine) spins into life with a light zizz before settling to a busy idle. It puts out 123bhp at 6800rpm and 109lb ft at 4800rpm, and, as you might guess from those figures, it does its best work at the top end of the rev range. Indeed, it’s typically Japanese in that it wants to be thrashed and never makes what you’d call a deep-chested sound. The throttle response is sharp, particularly at the top of the pedal’s travel, which helps make the Swift feel more urgent than it really is at low revs.

Set off and there’s a Mini-like wheel-at-each-corner feeling. The ride is much better than a Mini’s would be on 17in wheels, however, the Swift Sport soaking up some truly appalling roads.

And then you go for a corner, only to discover that the Swift’s turn-in is seriously lacking bite. And although the steering is well weighted, it offers no detail about what the Eagle F1s may or may not be doing. It’s all a bit unnerving at first, but take the time to learn how the Swift wants to be driven and it can be huge fun.

Faster corners are easy – just turn in a bit earlier and the Swift stays flat and poised throughout. In tighter corners it takes more bullying. Don’t take the initial signs of understeer as the end of play; instead add more lock and stay with it, because then the chassis really starts to dig in, finding much more grip than you thought possible.

And once you’re really leaning into the corner you can play with the throttle. For best effect you want to be up in the big numbers on the rev-counter. Once there, lift-off oversteer becomes your new best friend, especially in the wet. It’s hilarious, with the short wheelbase feeling very lively but never really scary, although you can understand why Suzuki makes you press the ESP button for quite some time before it disengages.

The Swift Sport isn’t a paragon of front-wheel-drive finesse, but you get out of it grinning. You can imagine just how much fun it would be punting one along in the JWRC. With group nine insurance you really can’t ask for much more.

It could even mean that a few people might think of something other than a Grand Vitara when you mention four wheels and Suzuki.