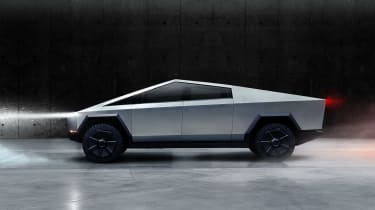 The Tesla pickup truck Elon Musk promised has finally arrived – and it’s… err, quite something.

Called Cybertruck, Tesla suggests with its usual modesty a vehicle with ‘better utility than a truck, with more performance than a sports car’, but it’s the Marcello-Gandini-on-acid styling that draws the most attention.

If most pickups are a trio of boxes, the Cybertruck is more like a high concept house from an episode of Grand Designs. There’s not a curve in sight, and you get the impression Musk would have made the tyres polygonal if he could, but if you’ve grown weary of the brand’s smooth but generic shapes so far then the Cybertruck is definitely a wake-up call.

Tesla claims enormous structural strength and longevity from the chassis too – the body is formed from stainless steel (best known in the automotive sphere from the DeLorean, but also a material Musk is using in SpaceX’s cartoonish Starship rocket). Corrosion resistance is obviously a plus, but Tesla’s claim that it helps eliminate dents seems more dubious – particularly given the armoured windows smashed during a demonstration at the car’s reveal.

It also remains to be seen how the truck fares aerodynamically or in crash testing, but contrary to its appearance in profile the Cybertruck does indeed conceal a proper load bed, with 6.5 feet of length and 100 cubic feet of capacity (including the frunk), and the ability to roll a shutter over the whole bed to conceal smaller items. 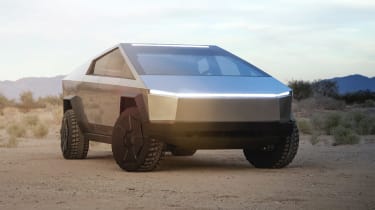 As that suggests, there are different motor options in the Cybertruck, with an entry-level rear-wheel-drive, single-motor variant, an all-wheel drive, two-motor model, and the range-topping tri-motor. Range is quoted as 250+, 300+ and 500+ miles respectively, and while no power outputs are quoted, the performance figures give a reasonable indication of the truck’s ability – the single-motor model is claimed to reach 60mph from rest in under 6.5sec, the dual motor under 4.5sec and the tri-motor sub-2.9sec.

While a truck that can accelerate that quickly seems like overkill, Tesla’s previous demonstrations with its upcoming electric lorry show the main benefit of that much easily accessible power and torque is the ability to accelerate quicker when pulling heavy loads. Tesla says the low centre of gravity – a virtue of its skateboard-style battery placement – helps traction, another significant factor in towing.

Unladen though, the truck probably feels quite remarkable, particularly given its size and the ability to seat six passengers. The interior carries on Tesla’s recent work – a steering wheel and tablet-style 17-inch central touchscreen are really all you get – but it’s difficult to imagine the yoke-like steering wheel or marble-effect dashboard reaching production.

It’s difficult to imagine any of it reaching production in fact, at least any time soon – there are still a couple of other Tesla production models due before it, including the aforementioned lorry and the Model 3-based Tesla Model Y crossover.