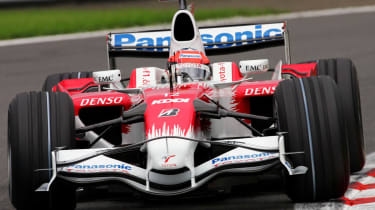 Toyota is the latest team to pull out of Formula 1. While it comes as a bit of a surprise, it should be no shock, with increasing financial difficulties – Toyota posted its worst ever set of financial figures back in March 2009 – and the firm’s less than prosperous record in F1.

In its eight seasons and 139 rounds in the sport, Toyota has never won a race, although it did manage a fifth place in the constructors’ championship this season while its drivers Jarno Trulli and Timo Glock were eighth and tenth respectively in the drivers’ standings.

Trulli is expected to race for the new Lotus F1 team next year while Glock should be behind the wheel of a Renault in 2010. The future of Kamui Kobayashi – who stood in for the injured Glock in 2009’s final two races – is unclear, but an impressive race in Abu Dhabi should see him remain in the sport.

‘TMC, which had viewed its participation in F1 as contributing to the prosperity of automotive culture, remained dedicated to competing at the pinnacle of motor sports, even in the face of the abrupt economic changes that started last year. However, when considering TMC’s motor-sports activities next year and beyond from a comprehensive midterm viewpoint reflecting the current severe economic realities, TMC decided to withdraw from F1.

TMC leaves F1 having compiled 13 podium and 87 point finishes over eight challenging seasons since 2002 with Panasonic Toyota Racing, a full-constructor team. It views its time in F1 - in which teams put forth their best efforts to fiercely compete at racing’s highest level - as an irreplaceable experience that provided an opportunity to develop both human resources and its R&D operations. TMC expresses its deepest appreciation to its F1 fans and others for their warm support.

TMC also wants to express its heartfelt gratitude to all Panasonic Toyota Racing drivers to date and to all Toyota Motorsport GmbH employees who have helped make the team’s achievements possible. TMC intends to do its best to find a solution for those parties who will be affected by any inconvenience this decision may cause.

Drawing on its experience in F1 and other motor sports, TMC intends to move forward in developing exciting production vehicles, such as the Lexus LFA supercar and compact rear-wheel-drive sports cars. In motor sports, it will not only race in various categories, but will also actively contribute to further development of motor sports by supporting grassroots races and planning events in which it is easy for people to participate.’Follow evo on Twitter for the latest fast car and motorsport news