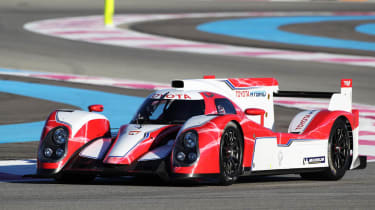 Toyota has announced the driver line-up for its second car at the 2012 Le Mans 24 hours. And it’s great news for British fans, with Anthony Davidson rescued from Peugeot’s departure from the sport to headline the TS030 Hybrid’s driver trio.  The 32-year-old has competed in four Le Mans thus far, his best finish a fourth place with Peugeot in 2011. He’s also a key part of Sky’s Formula 1 TV coverage in 2012, following several years of commentating for the BBC. Davidson will share his Toyota with Formula 1 driver Sebastien Buemi, who has spent the last three years racing a Toro Rosso but was replaced, alongside teammate Jaime Alguersuari, at the end of the 2011 season. Japanese GT and Formula Nippon racer Hiroaki Ishiura is the third driver in the line-up.

The three will join the FIA World Endurance Championship from the Six Hours of Spa on May 5, competing alongside Toyota’s other TS030, driven by Alex Wurz, Nicolas Lapierre and Kazuki Nakajima.

Toyota’s hybrids will compete in the LMP1 class against race-win favourites Audi, which will field two of its formidable R18 TDI diesels as well as a pair of experimental hybrid racers.

The battle between the hybrids should help stem some of the disappointment fans felt as Peugeot abandoned its Le Mans campaign, removing Audi’s biggest challenger from the sport in the process. See Toyota's TS030 Hybrid racing car in action below...