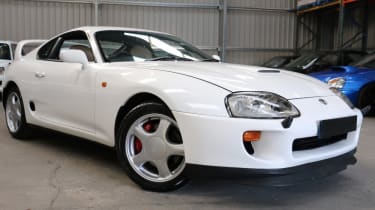 With cars like the Honda Civic Type R, Nissan GT-R, Toyota GT86 and Honda NSX available on the market, it’s hard to subscribe to the theory that Japan no longer produces competitive sports cars.

But there’s a lot of truth to the theory that things were still better in the 1990s, when Japan’s bubble economy meant automakers had cash to burn on exciting cars – and one of those was the Supra launched in 1993.

It’s become something of a tuning icon, and that brings us to why this 1994 Supra from Sports Cars Direct in London (via Classic and Performance Car) is our choice from the classifieds this week: its engine.

In our recent six-cylinder celebration, we asked which other powerplants you’d add to the list. More than any other, it was Toyota’s 2JZ inline-six that came up in the comments.

For good reason, too. Not only does it have a reputation for bulletproof reliability (as well as the Supra, the 2JZ saw service in several Japanese-market saloons, as well as cars like the Lexus GS300 and Lexus IS300 that came to the UK), but twin-turbocharged versions in particular (dubbed 2JZ-GTE) are a perfect platform for accepting high levels of power.

In standard form, the engine is good for 276bhp – the popularly-quoted figure of the ‘gentlemen’s agreement’ between Japanese firms for their high performance cars. But search around the internet and it’s not unusual to find examples adding as much as 1000 to that figure. 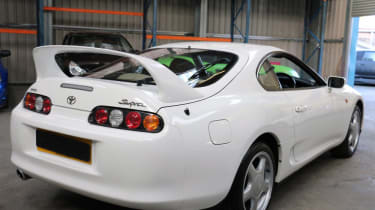 By that point it’s far from a simple ECU tweak, but it’s not hard to see why the engine has developed such a reputation.

The example on sale is one of the desirable turbocharged versions, but sadly it’s also the less desirable automatic.

What really stands out though is the car’s condition. It’s becoming ever more difficult – thanks to that reputation for tuning – to find entirely standard examples. This appears to be just that, thanks in part to a history of dry storage ‘for investment purposes’.

There’s a huge main dealer service history and everything else, from the five-spoke alloys through the white paintwork to the cream leather interior, look factory fresh. In total, the car has covered only 60,000 miles.

If and when the ‘new Supra’ arrives we’d be surprised if it has the same scope for tuning as its 1990s equivalent – but if the latest versions of cars like the Nissan GT-R and Honda NSX are anything to go by, we may also have a lot to look forward to.

> Find Toyota Supras for sale on Classic and Performance Car