The massively turbocharged off-roader hits a top speed of 230mph 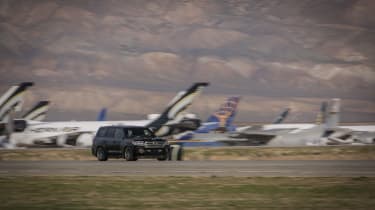 You won't typically find it blasting down runways at speeds a Jaguar XJ220 or Bugatti EB110 could only hope for. But that’s exactly what this ‘Cruiser is has been designed to do, and it has claimed the title of the world’s fastest SUV with a top speed of 230mph. 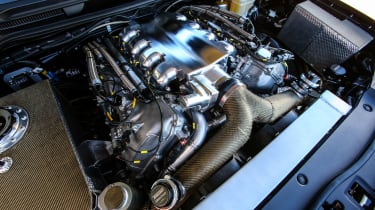 The first task in transforming the huge SUV into one with a top speed capable of shaming the current trio of hybrid hypercars was to give it more power. A lot more power. Toyota’s LA based Motorsport Technical Centre (MTC) started with an American-spec Land Cruiser with a naturally-aspirated 5.7-litre V8 that puts out 381bhp.

The Land Cruiser’s eight-speed all-wheel drive transmission was scrapped in favour of a three-speed drag racing gearbox with an overdrive sending power to rear wheels only. 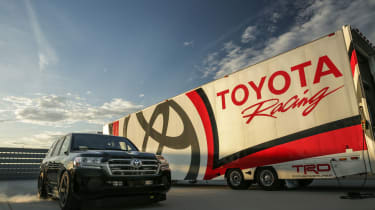 The MTC engineers also took on the not insubstantial task of making the Land Cruiser scythe through the air with a little more grace. The entire body was lowered by around 130mm to reduce the amount of air passing under the car, while the underbody was made smooth with a flat panels and a diffuser to reduce the turbulence of any air that does find its way under the car. The wing mirrors were replaced by small cameras to reduce the SUV’s frontal area and a rear spoiler with a sizable gurney flap helps push the driven rear wheels into the tarmac.

To pilot the vast (and vastly powerful) off-roader to its ludicrous top speed, Toyota called upon ex-Toyota NASCAR driver Carl Edwards. He performed the runs in California at the 2.5 mile long runway at the Mojave Air and Space Port.

After cranking up the boost slightly another attempt was made and Edwards blasted up to the record-breaking top speed of 230.02mph.