Toyota Corolla GR Sport shown at Geneva – but is a proper GRMN on its way? 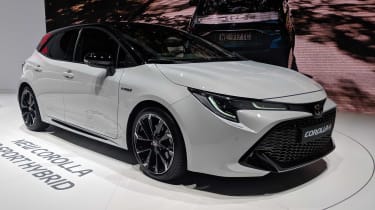 Building on the all-new Toyota Corolla, the GR Sport specification is not a mechanical upgrade, only a collection of aesthetic changes to make the already striking Corolla look a little bit more aggressive.

Available in both hatch and estate body styles, and with hybrid-assisted 1.8- and 2-litre petrol powertrains, the GR Sport’s styling changes consist of rejigged front and rear bumpers, diamond-cut 18-inch alloy wheels, a new grille finish and optional two-tone exterior paint. The interior has also been given the GR Sport treatment, including contrasting red stitching on the seats, dash and doors, and new black sports seats.

> Click here for our review of the Yaris GRMN

UK availability of the Corolla GR Sport has yet to be confirmed, possibly because of the lukewarm reaction to Toyota’s other GR Sport model, the Yaris GR Sport Hybrid. Of course, what we’re really waiting for is a proper Corolla GRMN, rumours of which have evolved from just whispers to unofficial confirmations from Toyota insiders. 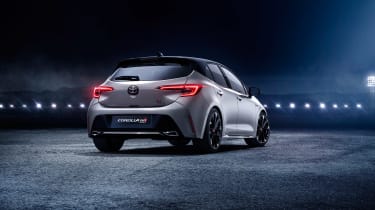 The chances of there being a Corolla GRMN look promising, though, as the new Corolla is based on Toyota’s latest global architecture, making for a more solid base on which to create a proper Golf GTI and Hyundai i30 N rival in the future. Toyota’s regional staff have also been pushing for a hot hatch Corolla variant, meaning there is pressure from both inside and outside of the Toyota organisation. The red model shown in these images is the Corolla concept from this year’s SEMA show, an example of what an even hotter Corolla could look like.

Engine possibilities are pure speculation at this point, not least because Toyota does not currently have a new-generation high-output turbocharged four-cylinder motor that has been fitted to the platform. It is worth mentioning, however, that Toyota will fit a BMW-sourced ‘B48’ turbocharged four-cylinder to entry-level versions of the GR Supra in Japan, and as BMW’s latest modular power plant it is not only future-proofed and able to be spun around for transverse application, but can also be found in BMW’s new X2 M35i in 302bhp form. Time will tell if Toyota’s partnership with BMW might extend to include this level of engine sharing.

To reiterate, this is all highly speculative, and Toyota says that if something like a Corolla GRMN was to eventuate we’d be unlikely to see anything before 2020 at the earliest. But the wait could be worth it. The Yaris GRMN was based on an ancient platform, yet it was still a highly entertaining little hatchback, so imagine what could be done with the all-new Corolla.