More associated with late-night mini cabs than performance driving, the Corolla does hide a decent chassis under the surface 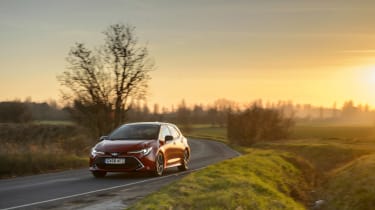 Last year Toyota released an all-new version of its Corolla nameplate. This came after an attempted rename of the previous model to ‘Auris’ a couple of generations ago, itself a ploy to try to shed the Corolla’s staid reputation as a car widely accepted to be the epitome of dull motoring.

It may not come as a shock to find out the change of name didn’t associate with a change of image, so instead the name has returned, and this time with a distinctive new styling treatment to more aggressively counter that argument. It’s not just the striking looks that aim to change our perception of the new Corolla, but also the platform underneath it – one that in other guises within the Toyota range has slowly been transforming the driving experience of Toyota’s mainstream offerings one new model at a time.

So with that new chassis on hand, underpinned by intense efforts by Toyota boss Akio Toyoda to instil a new sense of dynamism throughout the entire range, does the new Corolla finally stack up against its rivals as a hatchback you’ll want to buy because of the way it drives, rather than its impeccable reliability rating?

Powertrains are unsurprisingly hybrid biased at this early stage. Two different hybridised models are offered – a 1.8-litre and 2-litre. They produce 122 and 178bhp respectively, and both pair a naturally aspirated four-cylinder petrol engine running on the more efficient Atkinson cycle with a small electric motor and seemingly old-school nickel hydride battery pack. Both powertrains are available only with a CVT transmission and front-wheel drive.

There is also a non-hybridised 115bhp 1.2-litre turbocharged four-cylinder engine borrowed from the C-HR compact SUV combined with a six-speed manual transmission. We’ve yet to drive this entry-level model, and it’s likely few people will, with a majority of sales expected to be made up from the two hybrid models. 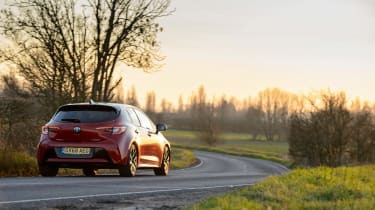 Performance of the 1.8-litre hybrid is leisurely, taking 11.2sec to reach 62mph. The 1.2 turbo usefully lowers this to 10.2sec, but it’s still hardly sporting. Higher-powered hybrid models have yet to reach the UK, so at this stage do without any official acceleration numbers.

The package is ostensibly uninteresting. It’s the usual mix of transversely mounted four-cylinder hybrid powertrain, CVT and front-wheel drive, but where hybrid drive systems can often feel disjointed or unrefined, Toyota’s experience in its well-trodden way of making a hybrid system work has paid off, as it’s now by far and away the most refined, flexible, and dare I say it, mildly enjoyable hybrid powertrain in a Toyota so far.

The platform is the result of a total redesign by Toyota’s engineers, and is found underneath a majority of its new models, from the C-HR, to the Prius, new Camry (another retro Toyota nameplate returning to the UK) and RAV4. It’s an endearing chassis, one that’s forgiving and pretty unflappable despite the large 18-inch wheels and relatively low-profile tyres on the model tested, remaining composed and refined over all sorts of road surfaces. So what might otherwise have been an awful combination of hybrid hatch and no secondary ride quality has actually turned out to be a perky powertrain residing in a sound, capable chassis. Who would have thought? 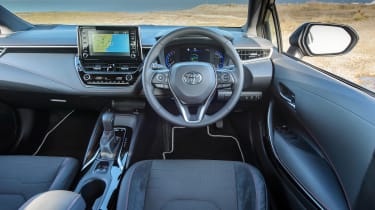 Aside from the woeful infotainment system, the interior is smartly dressed and well built – definitely up to the class average, if still behind a Golf and the new Mazda 3. The styling might turn you off if you find the basking shark aesthetic a little strong, but at least it warrants a second look as opposed to fading into the background completely.

As for the 1.8-litre model we have driven, it is definitely slow, but taken with a grain of salt it’s a far more responsive and usable powertrain than the numbers suggest. We can thank the electric motor for this, as its instantaneous torque makes the weedy 105lb ft figure feel much more substantial than one might otherwise think. The whole system does its best work in towns, but get it out onto bigger roads and the electric motor’s influence is felt less. But at low speeds, it features almost no lethargy or hesitation, if anything being a bit overeager in Sport mode. This is a refreshing change from the common sluggishness found in the current crop of vicious stop-start systems and dual-clutch transmissions.

Push a little harder and it doesn’t fall apart either, the body control underpinned with a surprisingly rigid structure. The drone of the CVT does rear its head at higher speeds though, and keep your foot on the throttle and it quickly deteriorates into a mess of hanging revs and buzz box acoustics as the petrol engine’s impressive low-speed noise suppression falters. 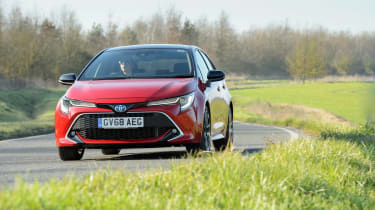 As a commuter then, the Corolla is now finally more than merely fine, even if it still might not get our vote as the ideal ‘normal’ family hatchback. What this exercise has told us, though, is that if Toyota does decide to make a hot Corolla with a bit of help from its Gazoo Racing division, the underlying components are certainly capable.

Prices start at £21,305 for the basic 1.2-litre entry-level model, and rise to a rather startling £31,580 for a fully loaded model fitted with the incoming 2-litre hybrid powertrain. Equipment is strong to compensate at every level, but then LED headlights and a high-res infotainment screen don’t really carry as much cachet as they used to. Still, Toyota’s strong resale value and the exceptionally low running costs make it a strong ownership proposition to the normal car buyer.

Rivals such as the VW Golf are priced higher, but then have a much wider spread of capability, not to mention variety of powertrains and specifications. The Ford Focus remains a sweeter steer, and its turbo-triple engines are more entertaining and far more comfortable at higher speeds. But it’s the Mazda 3 that proves to be the biggest counterpoint to the Corolla, as the two are specified and priced rather closely on paper, yet represent two very different propositions for hatchback buyers. 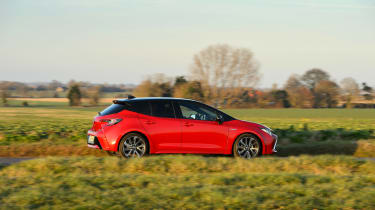 The Corolla is bigger, comfier and faster in the real world (in equivalent 120bhp-odd forms) and will be cheaper to run thanks to the hybrid powertrain, but putting to one side the Mazda’s far superior interior, equipment levels, styling and refinement, it also offers a more joyful driving experience. There is talent under the Corolla’s skin, but it resides beneath a thick pillowy layer of joylessness defined by its buyers’ demographic more than anything. The Mazda 3 on the other hand actively encourages you to enjoy yourself. Its transmission is snappy, the steering sharp and accurate and overall it offers a level of driver interaction that Toyota has just not engineered into the Corolla’s make-up as it is.

There is a good chassis under there somewhere, and as the Mazda 3 proves, it needn’t require a traditional hot hatch template to reveal it.