The third-generation Toyota Auris is built on the marque’s new platform and promises ‘a more dynamic, engaging driving experience’. 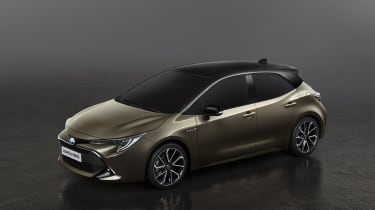 Toyota’s hybrid-vehicle push continues with the new Auris, which will be offered with three powertrains – two (petrol) hybrids and one petrol. The electrically assisted powertrains comprise a 1.8-litre and new 2-litre power unit that develop 120bhp and 177bhp respectively. We suspect the former could borrow the running gear found in the hybrid Toyota C-HR, which is likely to donate the aforementioned 1.2-litre engine, too.

According to Toyota, the new range-topping 2-litre harnesses the dynamic benefits of the TNGA, delivering an ‘energised drive’. The platform has been designed around specific objectives: design simplification, intelligent placement of components and improved driving dynamics.

In the Auris, this translates to a low centre of gravity, the fitment of multi-link suspension at the rear, and increased torsional rigidity. Toyota is keen to point out these enhancements sharpen the handling without compromising on comfort.

The Auris’s profile takes on a squatter stance compared to its predecessor, thanks to an increase in length (40mm) and drop in ride height (25mm). Interestingly, the cowl line is sustainably lower (47mm), too, which could point towards a more focused driving position with a lower hip point.

Toyota confirmed production of the new Auris will be undertaken at its UK-based Burnaston plant, the recipient of recent investment worth £240m. Prices are yet to be fixed, but around £20k is expected, with the first deliveries due this summer.