Low torque figure limits low-revs performance, but performance is respectable if you're prepared to work for it

The Toyota GT86 is a car that more often than not feels like it needs just a little bit more when it comes to performance.

The 7.6se 0-62mph time (unchanged for the facelifted model) is fine on paper, but on the road the GT86 feels slower than you'd expect for a car with such an emphasis on driving. The more pressing issue, however, is how hard you need to work the engine to reach the quoted 197bhp and crucially, the meagre 151lb ft of torque produced at a sky-high 6400rpm.

Indeed, with the car’s true performance on offer only close to the red line, you need to work the engine hard to extract the flat-four engine’s potential. The commotion will come as a surprise to anyone used to modern four-cylinder turbocharged units – the sound is industrial and sometimes even harsh down low, and offbeat at high revs. But befitting the boxer design it's also free of vibration, and will happily spin to the limiter without issue, prompting a beeping to remind you another gear is due. There's a satisfying induction note in the mid-range too, which perhaps offsets marginally the slightly flat feeling lower down the rev counter 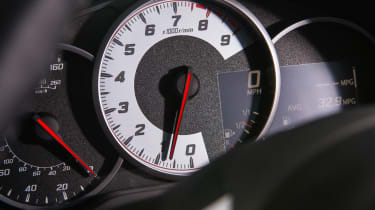 It does mean that exploring the car’s limits requires a committed driving style. We’re not saying the GT86 needs another 200bhp, just a broader powerband and another 50bhp and 50lb ft, which would alleviate some frustration and imbue the driving experience with a little more gusto and verve.

Conversely, the GT86 proves that you don’t need to be risking life, limb and penalty points in order to enjoy a car. While you need commitment to enjoy the full reach of the engine, you're also not travelling obscenely quickly if you do so. It's a car that proves that sometimes, chassis balance and the sensation of pushing a car to its limits are more valuable than all-out straight-line speed... though a little more of the last wouldn't go amiss