The engine has a slightly unpalatable, industrial quality to it, with a thrashy and strained sound down low and some curious noises higher up. It does, however, like to be revved – indeed, it needs to be revved – and works nicely in tandem with the excellent six-speed manual gearbox. There's a great mechanical connection with the manual 'box, with a precise feel matched to a light shift. It can be a little obstinate when cold, but it's among the best out there once the fluids are warm. The combination makes sense as a powertrain, but the engine’s utilitarian approach to delivery makes the GT86 feel less special than it perhaps should.

As for the six-speed auto, it removes the mechanical interaction that makes the manual car such a joy. Performance also drops, which is a particular problem given that, for the most part, it's at a premium in the GT86.

Unlike modern turbocharged engines, you really need to utilise the entire rev range to extract any sort of performance from the 2-litre boxer – 197bhp is on offer at 7000rpm (the limiter is at 7400rpm), while the modest 151lb ft of torque only arrives 600rpm earlier. As for the electronic throttle, it has been mapped to make the engine feel more sprightly at lower revs, but don't let that fool you – you need to drive the GT86 hard to get at the power it develops.

While it might not be a particularly smooth or sweet-sounding engine, it does feel endlessly durable and tough, which means you don’t think twice about hammering it all day long. For many, the effort in extracting the car's performance is also part of the reward. It's just a pity the aural rewards aren't greater – this is no howling Honda VTEC. 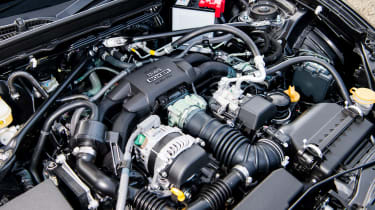 All GT86s ride on 17-inch wheels as standard, wrapped in a set of 215/45 R17 Michelin Primacy tyres, just like its Subaru BRZ cousin. These are a point of much consternation regarding the car’s handling (more of which later).

For suspension, the GT86 uses MacPherson struts at the front and double wishbones at the back. Both the standard-fit Showa dampers and the optional Sachs dampers have been revised for 2017 in an attempt to inject some more refinement, and Toyota says that while both pieces of hardware have been improved, the discrepancy in performance between the two has also been shrunk significantly – a good thing for buyers of the base model. The Performance Pack, which includes those Sachs dampers, also includes Brembo brakes, which do wonders for the car’s brake pedal feel.