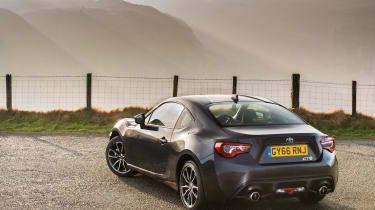 Ask yourself this: what do I really need from a car in order to be able to enjoy it on the road? If the answer is leather seats, parking sensors and a posh badge on the bonnet, then the Toyota GT86 isn’t for you.

If, however, what matters is three pedals, reactive steering and a sweetly balanced chassis, the GT86 is worth a test drive at the very least. The steering accuracy and control weights are supremely well judged, while the boxer engine's 197bhp and skinny tyres mean the chassis can almost always be teased out of shape. Crucially, in the world of 300bhp hatchbacks, it’s also a car you can get stuck into driving on public roads without fear of losing your licence.

Rarely does something in the motoring world feel ‘just right’ and while the GT86 isn’t without its issues, it comes very close. The 0-62mph sprint doesn’t set the world alight, but to compensate for that you spend a lot of time in the GT86 with your foot flat to the floor and using the engine to its potential – an increasingly rare experience in modern performance cars.

Back in 2017 the GT86 received a facelift, and a couple of special edition variants have arrived since, with no more power but some worthwhile extra features. Prices now start at £27,830. Admittedly, the changes are modest, but include upgraded dampers, a stiffer bodyshell, a better-appointed interior, more technology and several subtle but effective exterior design revisions. What hasn’t changed is the car’s mischief-making nature, for which we’re grateful. 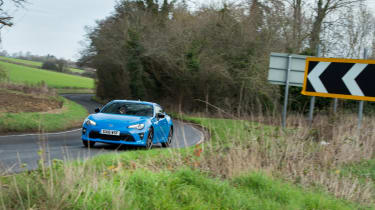 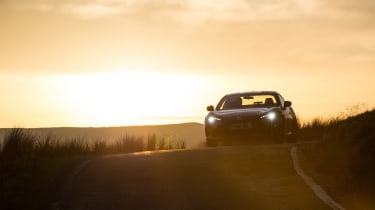 The GT86 is currently available in three different grades. At the bottom is the standard GT86, starting at £27,855 and offering 17-inch alloy wheels, a Toyota Touch 2 multimedia system, and goodies including keyless entry. It's starting to look a little pricey these days, but then the average hot hatchback is now over £30,000, so perhaps £28k isn't so bad for a rear-drive sports car on a bespoke platform.

Above this is the GT86 Pro, at £29,005. The extra dosh doesn't get you a new set of wheels, but does trim the front seats in leather and Alcantara, and lets you warm your posterior too, while automatic LED headlights and a rear spoiler join the party. That last one we've never been sure about – the GT86 styling is best unadorned, we reckon.

Next up the food chain is the current special edition, dubbed (in rather long-winded fashion) the £29,550 GT86 Club Series: Blue Edition. As the name suggests, it's blue – Electric Blue specifically, and one of the best colours we've seen on a GT86. The specification includes the same machined-finish 17-inch wheel design, plus a black rear spoiler and black door mirror caps. It's at its best though with the optional Performance Pack, as on the car pictured – there's a more subtle 17-inch alloy design, Sachs performance dampers and Brembo brakes. It adds £1460 to the price.

Chief amongst rivals is Mazda’s MX-5 RF powered by the range-topping 2-litre, which was refreshed for more power in 2018. The little roadster is a hoot to drive but loses out to the GT86 when you go in search of that last tenths of performance, where body roll curtails your confidence and thus progress when you really push. A used Porsche Cayman is certainly worth considering too; more recent 718 Caymans even have four-cylinder boxer engines like the GT86…

And the GT86 has a cousin, in the form of the Subaru BRZ (slightly more expensive now at £31,995). Its suspension is tuned very slightly differently to the '86’s, and its styling is arguably slightly more attractive after each had a mid-life restyle, while it's Subaru that created the cars' boxer engine. It flies under the radar a little – Subaru doesn't seem to market it as heavily as Toyota does the GT86 – but being nearly identical, it's still fantastic fun.

Share this on TwitterShare this on FacebookEmail
Continue ReadingToyota GT86 - engine, gearbox and technical highlights