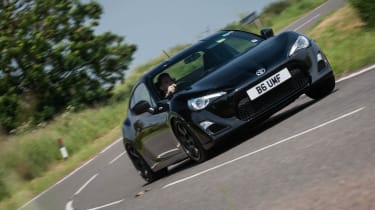 The Toyota GT86’s weakest link, as has been widely reported, is its flat and uninspiring engine. The 2-litre, four-cylinder unit produces 197bhp, which on paper looks like a healthy amount for a 1275kg sports coupe, but in practice feels rather underwhelming. Aside from a lack of straight-line performance, the standard engine also feels pedestrian in a car that is supposed to excite, and it doesn’t have the torque to make the most of the Toyota’s sweet chassis balance.

The obvious solution is forced induction. We’ve tried an Abbey Motorsport supercharger conversion and found it to be just the ticket, but at £5441 the 270bhp upgrade didn’t come cheap. Alternatively, Cambridgeshire-based Fensport offers a turbo conversion, which starts at £4314 and promises a similar power increase at a more reasonable cost.

Fensport’s Stage 1 turbo conversion uses an AVO kit and should achieve, as an absolute minimum, 260bhp without any other modifications. The added benefit of turbocharging over supercharging, reckons Fensport boss Adrian Smith, is that further modifications can be made over time to release yet more power and torque as and when the owner’s bank balance allows.

With ceramic header coatings, uprated intake and exhaust systems and other ancillary upgrades, this set-up can be lifted to 320bhp, at which point the fuel system becomes the bottleneck. Add new injectors and pumps and up to 380bhp is possible; that’s a greater level of expandability than a supercharger would offer, says Smith. The power increase is also achieved without resorting to the expensive business of upgrading engine internals.

Fensport uses an EcuTek management system, which allows the driver to switch between four different maps using the cruise control stalk, depending on the level of boost required at a given time. It also enables such trickery as launch control and automatic throttle blipping on downshifts.

This heavily modified demonstrator runs at 326bhp thanks to its upgraded exhaust, sports cat and closed-loop boost control (around £1500 plus fitting). There’s a slight but perceptible added muscularity from just over idle, but the turbo really starts to boost at 3600rpm, after which point the GT86 starts to shift down the road with the urgency of a much more expensive sports car. The engine pulls hard right around to the red line, which makes for a useful power band, but anybody expecting OEM levels of response from the very lower reaches of the rev range will be left wanting.

Only in low-speed corners does the engine dip below 3600rpm, so for the majority of the time the turbocharger is primed and ready to deliver its urgent performance. Not only does the car now have the straight-line speed to back up the sports car styling, it also has the strength to unstick the rear tyres with a throttle application alone. The standard car needs a determined ‘bung’ to get the rear end working, after which point it rarely has the muscle to keep the tyres spinning to sustain a slide.

Perhaps more important than the performance increase, however, is that Fensport’s upgrade gives the engine the character and sense of fun that the standard car is crying out for. The turbo helps to release the GT86’s frustratingly untapped potential so that the engine is no longer its weak link.

Add the price of Fensport’s mods to a well-specced GT86 and you’re looking at around £32,000, pricing it against Abbey’s supercharged ’86 as well as the new 266bhp Peugeot RCZ R, the 326bhp Nissan 370Z or a plethora of second-hand Lotus Evoras. The GT86 is the least exotic, but could prove to be the most fun too. And like Abbey’s conversion, it makes Toyota’s official effort, the £31,495 GT86 TRD, look overpriced.

Fensport’s modifications are very Toyota-focused, with show cars covering a wealth of products including the Starlet, iQ, MR2 and Celica. The amount of attention the tuning community has already given the GT86 shows it’s set to become a bit of a modifying icon.