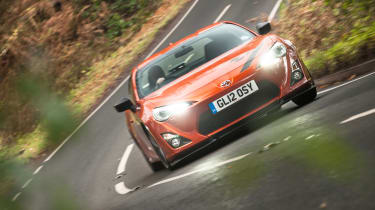 The back-to-basics formula for the Toyota GT86 and its Subaru BRZ clone was meant to shift the emphasis away from tiresome modern obsessions such as power and cornering grip and return us to a time when joy was an affordable, front-engined, rear-driven coupe with skinny tyres, and a damp roundabout.

Mission accomplished? Kind of. To drive a GT86 is to reconnect with an earlier paradigm when peak engine outputs weren’t just lower but had to be mercilessly hunted down with a pack of revs – which, in turn, made a slick, short-throw gearchange pretty much a necessity to keep the thrill of the chase alive.

The  regular GT86 has one of those, and a nice low centre of gravity, too. It changes direction alertly and feeds a constant news stream to the seat of the driver’s pants, all the better to act on should any gratuitous oversteering opportunity present itself. It’s this kind of old-school, rather frenetic involvement that the Toyota and Subaru deliver in spades.

It’s the prescription for good old-fashioned fun that Toyota and Subaru obviously conceived from the off. But prescriptive it is. And it sells the car’s potential short. Thing is, the GT86 only needs a bit more power (and admittedly quite a lot more torque) to broaden its dynamic repertoire and become a steelier steer without compromising its playful spirit. As such, it’s something of a gift to the aftermarket tuning fraternity.

Abbey Motorsport’s Stage 1.5 will set you back £1249 and comprises a re-map, HKS air filter and Cobra de-cat exhaust system. Power jumps from 197 to 212bhp, with torque a little fatter at 161lb ft (up from 151). ‘Most customers go for this first as a sort of toe-in-the-water exercise,’ explains Abbey Motorsport director Mark Gillam.

But for our morning on the roads around Surrey’s picturesque Box Hill he’s brought along a GT86 with the rather more serious Stage 1.5+SC conversion, which adds a Sprintex supercharger/charge-cooler kit (running 0.9bar boost) plus an oil cooler and sundry ancillaries. And that gives you 270bhp and 206lb ft. It costs £4452 as an upgrade from Stage 1.5, but you can have the whole lot done in one go for £5441. The result is an estimated 5.5sec 0-60 time – putting it in the same ballpark as a Lotus Evora, Nissan 370Z and Porsche Cayman – as does its 155mph top speed.

Under the bonnet, the little supercharger sits proudly atop the four-pot boxer motor with no obvious giveaways to betray its aftermarket origins. The engine fires up instantly and apart from a deeper exhaust burble, you could be in a regular GT86. You sit low and snug, the stubby gearlever snicks satisfyingly through its short-throw gate, the ride is unapologetically firm and the steering feels direct and precise.

Initial throttle response is characteristically crisp and linear, but Mark warns that this car has a slightly more aggressive throttle map than he, personally, feels is ideal, though it’s simply a matter of plugging in the laptop to soften it – whatever the customer wants. If that was me, I’d be happy to keep it as it is, especially if I craved reassurance I’d spent my £5.4k wisely.

Push a little harder and suddenly the GT86 wakes up and goes for it in startling fashion, the need to wring its neck to feel you’re going fast replaced by a sustained lunge from around 2000rpm and a sense of urgency – heightened, it must be said, by the swelling buzz-saw shriek of the supercharger – that would make a Porsche Cayman S feel tardy.

Keep the stability control in Sport mode and you can go remarkably quickly while nibbling amusingly at the neutral/oversteer interface. Switch it off and, well, you have to concentrate that bit harder, especially in the wet. That, of course, is a good thing. The GT86 you thought you knew becomes the one you hardly dared imagine.

Add the price of the Stage 1.5+SC conversion to a well-specced GT86 and you’re looking at around £33,000, pricing it against the new 266bhp Peugeot RCZ R, the 326bhp Nissan 370Z or a plethora of second-hand Lotus Evoras. The GT86 is probably the least ‘premium’ of the lot but it’s possibly the most fun, too. It certainly makes Toyota’s official effort, the £31,495 GT86 TRD (lots of styling additions but no more power) look overpriced.

Started by Mark Gillam’s father 40 years ago, Abbey Motorsport today can lay claim to being the longest-running tuner of Nissan Skylines and GT-Rs in Europe. The company’s tuning philosophy is ‘useable power’ and it claims that whatever the modification – from 350 to over 800bhp in the case of its GT-R work – ‘all start, run and drive with the docility of a standard car’.

As well as developing power upgrades for the GT86 and Subaru BRZ, Abbey Motorsport has also infiltrated the British drag racing scene and re-engineered John Bradshaw’s Project GTST Skyline, which currently has a best standing quarter-mile time of 7.68sec at 178mph.