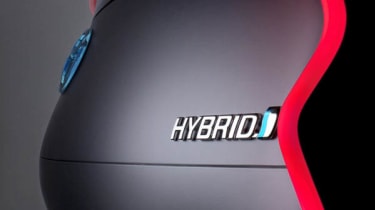 Toyota is planning to unveil its new FT-Bh concept at next month’s Geneva motor show. The concept will preview the company’s direction for its B-segment class of cars, a space currently occupied by the Yaris.   And it seems that Toyota has been following legendary Lotus boss Colin Chapman’s maxim of 'simplicate, then add lightness' with the FT-Bh, focusing on stripping weight from the car’s powertrain and chassis, as well as improving aerodynamic efficiency. The FT-Bh has a claimed kerb weight of just 800kg, which, despite its larger proportions, is still lighter than a current five-door Aygo.  The concept is a petrol-electric hybrid, with Toyota claiming that the FT-Bh will be 50 per cent more efficient than the average supermini on sale today. That would put the car’s CO2 output as low as 60g/km. A 1-litre Yaris emits 111g/km. There’s not much to report on the styling front yet, Toyota’s teaser press photos making the FT-Bh look more like pieces from an art collection than a car.  The FT-Bh concept is perhaps not standard fare for us at evo Towers, but we do love a fun supermini – witness Richard Meaden’s Peugeot 106 Rallye or Stephen Dobie and Adam Shorrock’s Renault Clio Williams.  There hasn’t been a good driver’s Toyota for a few years now but, with the advent of the GT 86, Toyota has perhaps turned a corner. And if that car’s fun filters into whatever real-world form the FT-Bh concept takes, an agile Toyota hot hatch could lie on the horizon.