The GR Yaris has yet to hit our roads, but Toyota has something else in mind for its homologation special 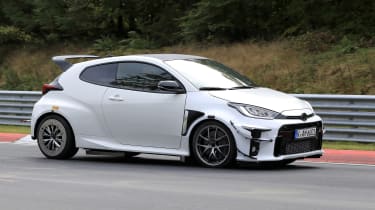 First deliveries of the new Toyota GR Yaris hot hatch are set to commence before the end of the year, but our spy photographers have already snapped a curious variant testing at the Nürburgring.

Though it shares the same bodywork as the production GR Yaris, there are a number of new aerodynamic components that point towards a possible increase in performance and capability derived for on-road or perhaps competition applications. At the front are a set of canards that increase downforce on the front-axle, while new vents can now be seen on the front wings that relieve air pressure in the front arches.

The new rear wing is the most notable addition, larger in size than most on any car of its class – and joins what looks like an air-flow reader that’s placed in the centrepoint of the rear bumper, pointing towards some form of under-body modifications that could clean up the under-body aero. 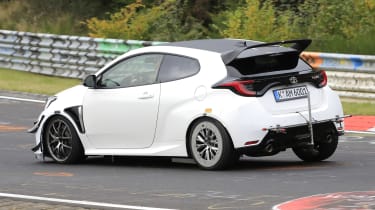 What lies under the bonnet is unknown, but it’s likely to share its 257bhp 1.6-litre turbocharged three-cylinder, which gets the standard GR Yaris from standstill to 62mph in 5.5sec and onto a 143mph top speed.

As the GR Yaris is a homologation special, this test mule could be an even more specialised road-going model, or rather something like a customer tarmac-specification rally variant for privateer teams across Group R, Group N or Super 1600 rally classes. Time will tell as development continues.