Vauxhall Adam review - stylish, but is it fun? - Engine and gearbox 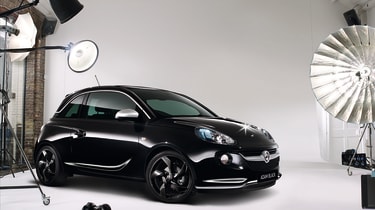 The 1.2-litre engine makes 69bhp at 5600rpm and 85lb ft at 4000rpm, a hallmark of its normal aspiration – this means it is hard work to elicit even its modest performance stats from the Adam. The 86bhp 1.4 does add 25 per cent more power but it delivers it at a heady 6000rpm, while torque nominally increases 11lb ft at 4000rpm. The higher-powered naturally aspirated 1.4 merely adds 13bhp at the same 6000rpm and its torque figure/delivery is identical to the 86bhp motor's.

As well as no diesel option (yet), there’s no traditional automatic gearbox. Instead, Vauxhall has chosen to fit a gearbox it calls 'Easytronic' to a small handful of naturally-aspirated 1.4s. Unfortunately, it's an automated manual, so while it's good for economy, going another four miles to every gallon, it's not as intuitive or smooth as a torque converter or dual-clutch auto.

The rest of the Adam range uses manuals: either five-speed transmissions on the normally aspirated cars, or six-speed units bolted to the 1.0- and 1.4-litre turbo engines. The six-speed item is the more pleasant ‘box to stir about the gate, though none snick around the gate with tactile precision.