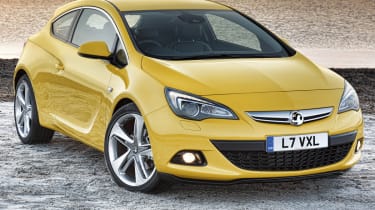 The Vauxhall Astra in sporty three-door form. The swish-looking GTC will account for around 20 per cent of total Astra sales, and a staggering 40 per cent of Europe’s GTCs will be sold in the UK. Hence the car launches here first, in November, while a lot of development work has been done on our roads.

Until the new VXR hot hatch arrives, this £21,380 1.6 Turbo SRi tops the petrol options, while the GTC range starts at £18.5K.Technical highlights?

Vauxhall is very keen to big up the car’s chassis components. The front suspension differs from the five-door Astra hatchback by using the Insignia VXR’s ‘HiPerStrut’ system. As well as reducing torque steer it cuts the amount of camber change on the GTC’s front wheels during cornering, improving grip, while less steering friction increases feel. HiPerStrut also allows the new Astra to wear 20in alloys for the first time.

The rear suspension is the impressive Watt’s link setup used on the five-door car, but with unique settings, while the GTC rides 15mm lower and boasts a longer wheelbase (10mm) and wider tracks (40/30mm front/rear).What’s it like to drive?

Our first drive of the Astra GTC was limited to Millbrook Proving Ground in Bedfordshire, where Vauxhall does a lot of its UK tuning work. But with road-replicating surfaces, it’s not a bad place to get the first taste of a car. And it’s good news – the five-door Astra is among the more dynamically adept in its class, yet the GTC steers with noticeably more feel and precision and rides well, though our test car had Vauxhall’s optional £790 FlexRide system fitted.

Most notably, understeer is reduced and there is far more communication from the car close to (and beyond) its grip limit. Traction often breaks at the rear first, and it's progressive and fun as it does so. This all bodes well for VXR models, which could have as much as 100bhp more than this 178bhp 1.6-litre turbocharged petrol model, and the slightly wayward, torque-steery ways of the outgoing hot hatch should be a thing of the past. At lower speeds the GTC felt competent and polished but a little plain, though, so how lower-powered petrols and the big selling 2.0-litre diesel version fare – and how much fun to drive it is on the road – remains to be seen. The signs are largely positive, however.How does it compare?

Vauxhall cites the VW Scirocco and Renualt Megane Coupe as rivals. The Scirocco is pricier but arguably more stylish, the Megane is very similarly priced and specced to equivalent Astras but will likely be less fun to drive. Proper dynamic judgement reserved until we try them all together on the road.

18in wheels are standard, with 19s and 20s as options, though Vauxhall says the ride is impressive on all sizes. The UK gets its own, meatier tune of electric power steering, too, thanks to its ‘severely undulating and heavily cambered roads’.