A new 178bhp engine in the Vauxhall Astra combines performance and economy, thanks to a modest 1.6 engine and a turbocharger 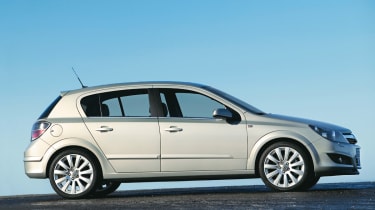 With our attention firmly on the Corsa VXR at the moment, it would be easy to overlook the newly refreshed Vauxhall Astra. Yet it too can be had with the new 1.6-litre turbocharged engine (albeit in slightly de-tuned form) that the VXR boys have just dropped into the Corsa.

Like most mid-size hatchbacks, the Astra has grown over the years, which perhaps explains why you fear the 1.6 turbo unit will feel a little swamped. Refreshingly, nothing could be further from the truth. Despite being some 400cc smaller than the 2-litre turbocharged engine it supercedes, the new 1598cc ECOTEC unit not only manages to develop more power (178bhp versus 168) but it also consumes 13 per cent less petrol in the process. Coming at a time when vehicle emissions are under the microscope, it’s heartening to see Vauxhall rising to the challenge of engine downsizing while still giving us more power to play with.

How does this pint-sized powerplant feel on the road? Surprisingly strong. So strong that if it weren’t for the badge on the tailgate you’d never guess the Astra was powered by such a modest-sized motor. Turbo lag has been kept to a minimum, and some clever mapping ensures that even the smallest squeeze of the throttle delivers meaningful response.

There’s plenty of low-rev muscle, too, with 170lb ft of torque available constantly from just 1980rpm right up to 5500rpm. Another bonus of that clever ECU programming is that it senses when you need maximum overtaking power and triggers an overboost function that gives you 196lb ft for a maximum of five seconds.

Vauxhall claims a 0-60mph time of 7.7sec and a top speed of 139mph, which is quick enough, especially for a 1.6. However, thanks to that overboost facility and a set of well-chosen gear ratios for the six-speed manual transmission, the Astra actually feels keener than even those figures suggest.

Despite the ample amount of torque on tap, the Astra’s front-wheels don’t scrabble for traction or tug your wrists over uneven road surfaces, and it’s just as happy eating motorway miles as it is chasing along country roads.Press the ‘Sport’ button to change the switchable dampers to their harder setting (you’ll get a sharper throttle response and weightier steering too), and the Astra’s sporting ability is increased while its trademark firm- but- rounded ride, generous grip levels and predictable-but-fluid handling are all preserved.

In addition to the new engine, the 2007 Astra has also received some mild cosmetic tweaks. These concentrate on the nose, which now features dark-tinted headlamp housings and a honeycomb grille. Our test car was also fitted with the highly desirable panoramic windscreen option (£850), which extends the glass into the Astra’s roof to create the feeling of an aircraft-style canopy.

Natural concerns about vulnerability to stone chipping are dispelled when you learn that the monster screen is actually less likely to crack thanks to thicker, 5.5mm laminated glass. It has no adverse effect on the Astra’s five-star Euro NCAP crash-protection rating either.

Perhaps the only fly in 1.6i Turbo’s ointment is that, even in the most basic trim, it flies within a grand of the Astra VXR’s price tag. But if you like the idea of a versatile sporting hatchback with 36.7mpg combined-cycle economy, the 1.6i Turbo is an impressive package.